Dropbox’s business software is ready for a big sales push as it bounds towards an anticipated IPO, so today it announced the opening of a sales and engineering office in New York City. In its first place on the East Coast, the cloud storage startup developed at MIT will house 10 sales people and two to three engineers in a temporary space near NYU before growing into a permanent spot.

VP of Engineering Aditya Agarwal tells me that after “gutting Dropbox from the ground up to support two parallel Dropboxes, we got good feedback from early customers. We know we have a lot of customers out on the East Coast and especially in NYC, so we’re sending a sales team to New York. But at the same time we also realize NYC is, after SF and on par with Seattle, the biggest pool of engineering talent. We’re hoping to grow rapidly over the next 12 months or so.”

As I wrote in February, Dropbox is growing up. While once primarily known for its youthful culture, AK-47-wielding dinosaur mascot, and consumer popularity, it wasn’t seen as having sophisticated-enough permissions and security to support enterprises. But it spent a year re-architecting its software to allow for simultaneous use of both personal and professional accounts, as well as deep admin control of who sees what. The result was Dropbox For Business.

Now with an IPO on the horizon, $350 million in new funding, and over 200 million users, it needs to turn that hard work into revenue. The company tells me the NYC sales team will do direct sales and onboarding assistance for Dropbox For Business, targeting small to medium businesses, mid-size companies, and enterprises. Those include NYC staple industries like media, fashion, architecture, and technology and the Dropbox customers they include like National Geographic, BCBG, and Eventbrite. 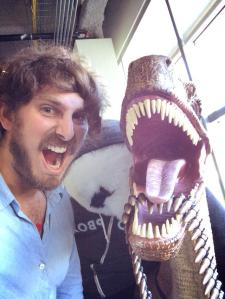 Until now Dropbox had its main San Francisco headquarters, around 40 people in Dublin, an Austin, Texas, office with 30 employees that plans to expand to 200, and a new unopened satellite office in SF that could house spillover from its current China Basin setup.

The company’s biggest concern in expanding to new cities is keeping its renowned company culture. Agarwal says that to keep the culture from diluting, “you have to make sure the first landing team is comprised of folks who embody those values deeply. You trust them to hire the right team and set up the right processes.”

Leading that charge for engineering will be Cuong Do, who tells me he’ll “bake elements of our culture into assessing candidates in our interviews, we’re going to place an especially high bar on culture.” While they’ll be bought, not interviewed, one iconic piece of Dropbox ephemera — the dinosaur from the SF office lobby — will be getting some new siblings. Agarwal laughs, “We should definitely get some velociraptors out there.”