Anonymous social networking is the new social media. (Or the new “SoLoMo.” We’ll see.) Developers are attacking the space right and left these days, it seems, despite the controversies surrounding the ethics and morality of these services, which include apps like Secret, Whisper, Wut and YikYak, to name a few. The latest to join the fray is Sneeky, a new photo-sharing app which lets you anonymously send photos to your contacts, presumably without them guessing the sender’s identity.

The newly launched app was created by “Draw Something” designer Garett Peek, along with David Alson, and Philip Golbraikh, who had the initial idea. The team cites a growing trend among younger mobile users, who are looking for more private ways to communicate, as one of the reasons they decided to build Sneeky. Says Peek, Sneeky is aimed at 16 to 24 year-olds, primarily. 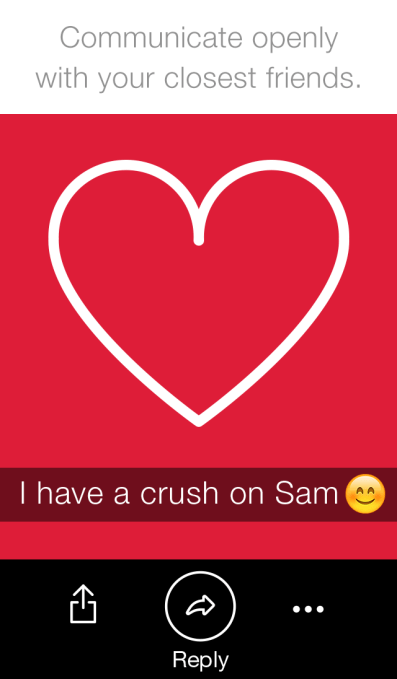 “They are on mobile, and are concerned about their public reputation,” he tells us. “Sneeky gives them a way to interact privately with their friends in an uninhibited way.”

The app itself is fairly straightforward. Users send photo messages to their friends, called “Sneeks,” by selecting the recipient from their phone’s contacts. Once sent, the receiver can also choose to save these photos to their iPhone’s Camera Roll.

Sneeky has some modicum of protection against abuse in place, as it offers tools that can limit its use to only mutual friends. That is, users can designate that they only want to receive Sneeks from mutual contacts – meaning friends that have your phone number, and where you have theirs. This is not on by default, however, and since a good number of users never check an app’s settings, it may be overlooked.

The company also claims the data is “fully encrypted,” so you’ll stay anonymous.

Of course, figuring out who sent a photo at first probably won’t be that difficult to do, as any new app won’t have critical mass. But Peek believes that will change in time, and that users could try to make their first “sneeks” photos of things that aren’t likely to give them away.

Something to note is that, on Sneeky, it’s okay to try and guess who the sender is – in fact, says Peek, it’s “part of the fun.” That’s the polar opposite from Secret, where those who attempt to triangulate their way to the original poster are often scolded by commenters for doing so.

Like others that have come before it, Sneeky’s embrace of anonymity could lead to trouble down the road, if it became popular. Though the “mutual contacts” feature could offer some protection, it’s an optional setting. And just because users are contacts, that doesn’t necessarily imply they are friends in the truest sense of the word. (Remember “Mean Girls?”)

Sneeky also suffers from the cold start problem some apps face. Until friends are on Sneeky, there isn’t much – or anything, really – to do. The app has a nice enough look to it, but ran a little slow, which could dampen adoption. (Your mileage may vary. I tested over Wi-Fi).

The bootstrapping team at Sneeky isn’t talking about users or downloads at this point, for obvious reasons, but Peek says engagement numbers are “high and promising.” The focus for now is on building the user base and fine-tuning the user experience, not revenue, which is why Sneeky is currently free on iTunes.