Nitrous.IO, which offers developers a flexible and collaborative online development environment, today announced that it has closed a $6.65 million funding round led by Bessemer Venture Partners.

The oversubscribed round includes almost everybody who also participated in the company’s $1 million seed round, with the exception of TIBCO Software and Draper Associates.

“The development community brought cloud computing to the masses, and now Nitrous.IO returns the favor!” said David Cowan, partner at Bessemer Venture Partners. “As a (former) coder myself, I know how great it is for developers everywhere to reclaim the hours spent every week building, maintaining and debugging localhost. In fact, I expect that in coming years  Nitrous.io will save billions of expensive man­hours.”

A the Nitrous.IO team tells me, the company plans to use the additional funding to scale out its engineering and marketing teams, but most importantly, it wants to start getting into the enterprise space, too. While the company also plans to expand its services for small startups and individual developers, it expects that, as larger companies open up to the cloud, they will also see the advantage of having their development environments available in the browser. 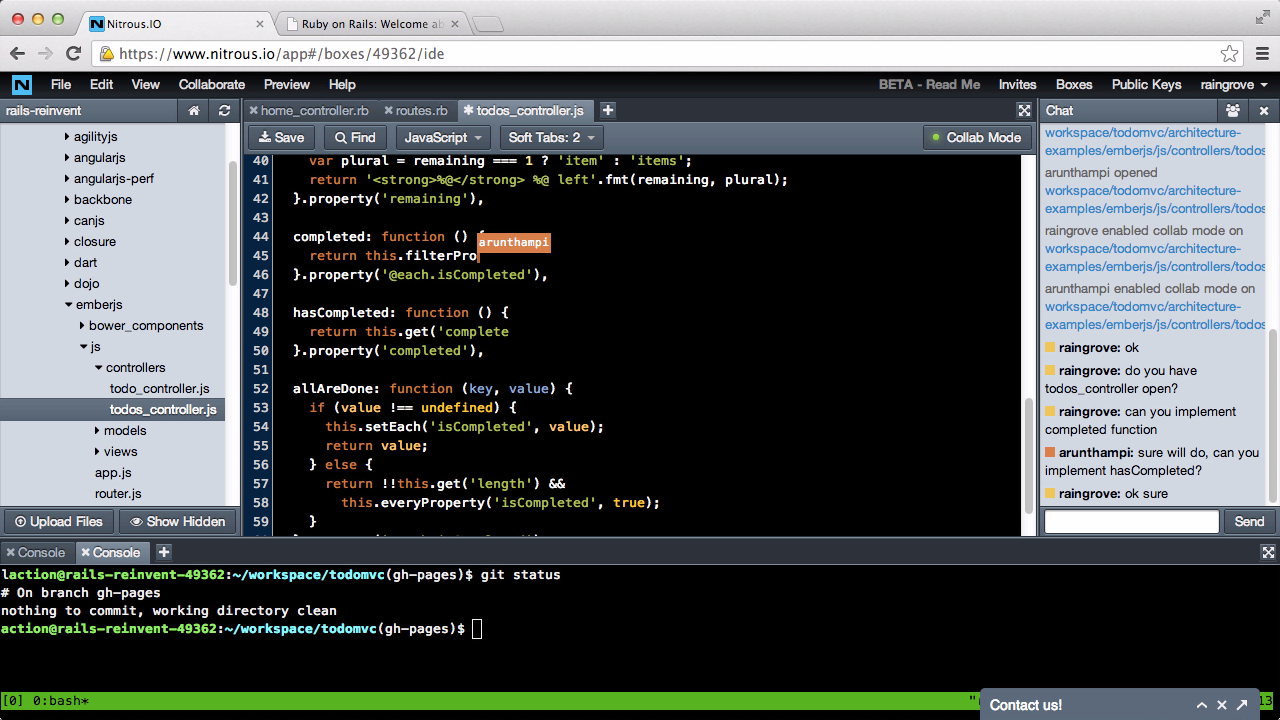 In the long run, this could mean allowing enterprises to run an on-premise version of the service behind their firewalls, too, but that’s still quite a bit off. For now, the team aims to create a product that works well for startups, as well as small teams in the enterprise.

Besides these two groups, Nitrous.IO is also very popular with budding developers who are learning how to code. Because it just takes a few clicks to set up a development environment on the platform, Nitrous.IO takes away the hassle of configuring machines and allows them to focus on the code instead. Given that the service is available in the browser, users don’t need an expensive machine to start coding, either, and thanks to its Chrome app, even a basic Chromebook will do.

“Nitrous.IO’s cloud development environments are an extension of industry standard tools,”said Nitrous.io co-founder Arun Thampi. “So, instead of learning to use Nitrous.IO, developers use tools that they are already familiar with while benefiting from an enterprise grade layer of automation, manageability, and collaboration.”

As the company’s CEO Andrew Solimine told me, the team believes that a web-based IDE is the logical next step for developers, and so far, about 100,000 of them have created accounts on the service.

“We believe in letting people to code from wherever they want, but we also know not everybody will convert and develop in the cloud,” he told me. To get these holdouts onto its platform, Nitrous recently launched support for Windows and Mac as well, so that developers can just use their existing editors and save to their local file system, which is then synced in real-time with the cloud service.