Don’t want all your friends to see your photos? That’s a big reason Snapchat has become so popular, and now Facebook wants to capitalize on more private sharing. Facebook for iOS 8.0, released today, offers an easy “Share with only these friends” option, allowing you to select specific people who you want your photo album to appear to in News Feed. The selector works and even looks a bit like Snapchat.

[Update 3/18/14: Facebook says that “Share with only these friends” is brand new for photo albums, but has been in testing and quietly rolled out for individual photos and status updates over the last few months without announcing it or the press noticing. So it’s all “new” but one-to-few photo and status sharing is a little less new than for albums.]

Now whenever you go to share a status update or photo, you’ll see the audience of that post at the top. For most people that’s set to “Friends,” but a tap reveals the selector where you can choose from your pre-made friend lists or individuals to share with by tapping their Snapchat-esque bubbles. To do this before, you’d have to make a new friend list each time you shared, which I doubt anyone was doing.

Since 2007, Facebook has been trying to push the concept of “microsharing”. The theory is that you’ll be willing to share a wider variety of content and post more frequently if only a subset of your friends can see it.

The problem is that Facebook wanted users to pre-make these lists or groups, which can feel like an arduous and stressful chore. “Does this guy belong in my super close friend list, my wider set of local buddies, my going-to-the-bar list, or what?” As a result, Mark Zuckerberg said in 2010 that “Almost no one wants to make lists…The most we’ve gotten is 5% to make lists, and most don’t make more than one.”

This is partly why Facebook relaunched Groups that day, which Zuckerberg recently said have 500 million users. Groups are great for sharing about a certain topic to people who are interested, but not really for sharing to a select set of friends. Facebook has also tried offering Smart Lists that have functions like notifying you whenever anyone on your Close Friends list posts. It even began suggesting people you should add to an Acquaintances list who would then show up less frequently in your News Feed.

Path tried to address the microsharing lists problem by having you start a whole new social graph of just your closest friends, but people typically over-added friends and still didn’t want to share to that many people. Snapchat nailed it by letting you choose exactly who to share each post to. 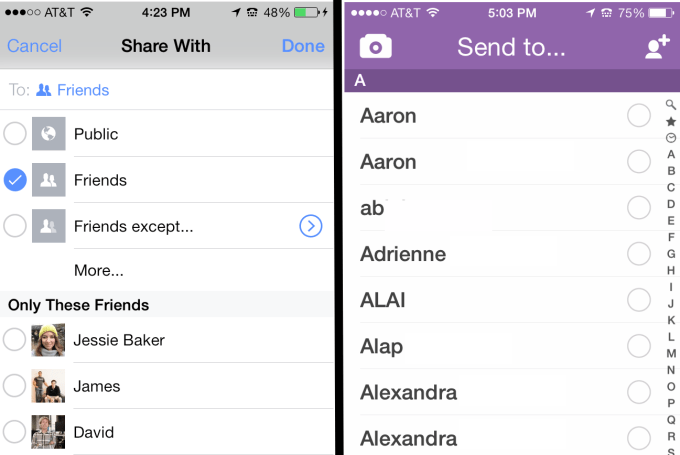 Facebook’s new Share With feature on the left, Snapchat on the right

Now Facebook does the same. While the new feature isn’t ephemeral messaging or photo chat (Facebook already has that in Messenger), it could be seen as a successor to Facebook’s failed Snapchat clone Poke. If it’s a success, people might become more comfortable sharing silly or racy photos because they can easily make them visible to only their favorite people or those who will find them fun. That could help Facebook soak up more engagement time and user data, as well as foster closer relationships between friends.

But it’s also quite possible that no one will notice the new “Share With Only These Friends” feature and people will just keep sharing to their default audience. Adding new ways to share hasn’t gone so well for mobile apps recently. Instagram Direct, a photo messaging feature, flopped, while Snapchat’s Stories method of sharing publicly hasn’t made too many waves, either. You can teach an old app new tricks, but it’s a lot harder to get people to remember to use them.