Dropbox has quietly acquired Zulip, the makers of a workplace chat solution for desktop and mobile, which had yet to publicly launch. Though still in private beta at the time of the acquisition, Zulip had already developed a suite of applications for Mac, Windows, Linux, iPhone and Android, which allowed users to share both public and private messages with their co-workers. Public messages would appear in “streams” related to the topic at hand, like “Design,” “Sales,” “Support,” and more, for example.

The startup, which has been fairly stealthy to date, competes in the broader business messaging space with other cross-platform chat solutions, like Yammer, Convo, recently acquired Tomfoolery, newly launched Slack, from Flickr co-founder Stewart Butterfield, or perhaps, more aptly, with email, which is still the place where a number of workplace conversations take place today, no matter what messaging solution a business may have in place.

In Zulip’s case, its take on messaging was one which sees it focused on conversations over more basic “chats,” where topical streams include subject lines and threaded replies. Each section could also have several sub-sections, too. In a screenshot on Zulip’s website, for instance, an Engineering stream included sub-streams like “Documentation,” “New Hire,” “WebKit Bug,” and others. 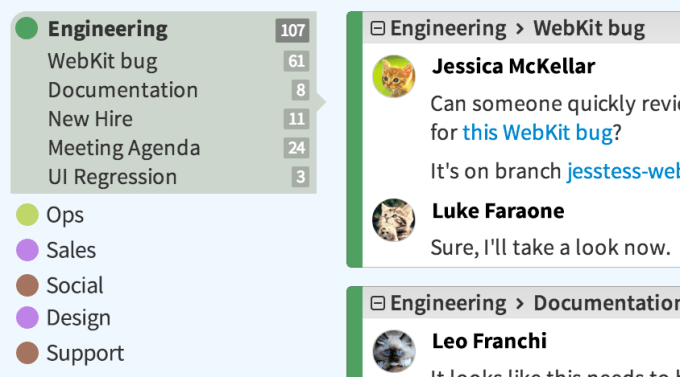 This feature, said Zulip, would help users be able to better find the conversations that mattered to them. Other features include robust and fast search, and several geeky additions that likely held developer appeal, like keyboard shortcuts, code syntax highlighting, an API, and off-the-shelf integrations for Trac, Nagios, Github, Jenkins, and more. 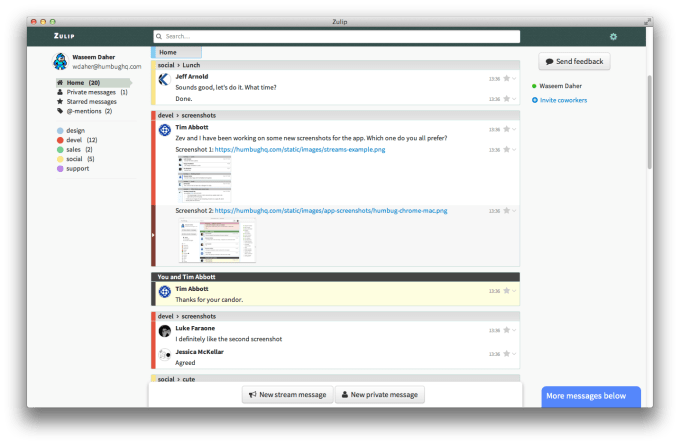 The letter sent out to current customers (see below) hints that future Dropbox integrations are yet to come, now that the team has joined the cloud storage company. This could signal Dropbox’s intention to better compete with other online file sharing solutions like Google Drive, where co-workers can create and collaborate on files together in real-time. With Zulip, users can drag a file into the compose box and it would upload and preview it for you, allowing you to discuss it with co-workers. It’s not hard to imagine how something similar could be a beneficial add-on to the core Dropbox experience.

Zulip had an undisclosed amount of seed investment, with AngelList noting funding from Paul English (CEO and co-founder of BLADE in Boston); and Meraki co-founders Sanjit Biswas and Hans Robertson.

We’ve reached out to both companies for comment and more information about the deal, including financial terms and future integrations, and will update with more as we have it.

Update: Dropbox only responded: “We have nothing further to share at this time.”

Full email is below:

Psst… hey, you! Yeah, you, the one using Zulip.
We have some news for you, but you gotta keep it secret. Can you do that? Alright, sweet.

Here’s the deal: Dropbox is acquiring Zulip. We’re incredibly excited about working with an awesome group of people on a problem with huge scale, at a company that’s as passionate as we are about helping people work together efficiently.

We couldn’t have gotten here without your support, enthusiasm, and evangelism — so, thank you!

But enough about us: what does this mean for the service you’ve come to love and enjoy?

For our customers, tomorrow it’s business as usual at Zulip. Please use all of the same channels to reach us with questions. As we make progress on integrating with Dropbox, I’m sure that we’ll have more announcements about what the product roadmap looks like going forward.

Again, please don’t share this news. We intend to announce this publicly in a few weeks, but wanted to give you folks a heads-up since you’ve supported us from the beginning.

Thanks again for your support, and if you find yourself in San Francisco, come and say hi!

From all of us here at Zulip,