Interest in startup accelerators and incubators has exploded in the past several years, but how effective have they been? One thing that has become clear is that “incubator” and “accelerator” refer to two very different models for startup workspaces, and the distinctions may have significant effects on startup success.

The key distinctions between incubators and accelerators are time period and structure. An incubator gives startups workspace and community at an affordable rate for an indefinite time period. Accelerators generally have workspace and a cohort that forms a community. They are run over a fixed time period with some significant degree of structure with regard to education and coaching. Accelerators are also capped by a demo day after which startups have to make it on their own, without further subsidy from the accelerator.

While the business incubator concept has been practiced in the U.S. since 1959, it has only been since 2005 that accelerators have become an alternative, and their rapid ascent in popularity over the past decade has been striking.

Y Combinator and TechStars are the two most well-known and successful examples of the accelerator model. But seemingly every day, they are joined by new industry, regional or corporate implementations of this approach. Universities, like MIT, have taken notice in the strong interest from its students in such programs and while there were strong and varying feelings about the efficacy of each model, there was little concrete data to validate the assertions being made.

So it was with great interest that I got to see the difference firsthand through two programs MIT ran for its student entrepreneurs during the summer of 2012, one using an accelerator model and the other an incubator model. Running proper experiments on startup education is hard, but through a series of accidental but fortuitous events, the teams selected for the programs were similar enough that we can draw conclusions about the programs by comparing their levels of success.

The accelerator, called the MIT Founders’ Skills Accelerator, or FSA, (now the MIT Global Founders’ Skills Accelerator, or GFSA), was announced in the spring of 2012 and attracted 129 applications for 10 spots. As a result of the extraordinary demand, the applicant teams were of such a high quality that we had a deep pool of qualified candidates beyond the 10 we could accept for the student accelerator program. As a result, we were able to procure space for a student-led incubator, called the Beehive Cooperative. Since the caliber of the FSA and Beehive teams were very similar, it significantly lessened the “selection bias,” which suggests that FSA teams would have stronger outcomes because they were stronger teams to begin with. In all, some 40 teams participated in the Beehive that summer.

An unexpected side effect of the Beehive was that teams did not want to leave the community they had built. The very social bonds and support that created such positive effects also had the negative effect of creating an environment that was too comfortable.

Each program had dedicated workspace in its own location, and participants quickly built strong communities that were fostered by the program leadership. The difference came in the educational structure.

The FSA put teams through twice-weekly seminars, countless individual meetings with mentors, and monthly “board meetings” that held teams accountable to the milestones they set at the beginning of the summer. Teams could earn up to $20,000 by meeting the milestones. By contrast, the Beehive offered occasional guest speakers, but otherwise participants had to take the initiative to schedule meetings with our center’s mentors.

The results proved informative for how we design programs to support student entrepreneurs. We expected to see both groups make good progress because they would receive lots of encouragement from the peers in their community, and the dedicated workspace would allow them to focus better. FSA teams would probably do better with the more high-touch support, but with so many strong Beehive teams, we expected some level of improvement across the board.

However, while some Beehive teams did achieve success, the overall rate was much lower than the accelerator teams. The rate of progress was noticeably lower as was the drive to get their team to achieve “escape velocity” – our term for being a strong enough team to move out of the “MIT bubble” and establish itself as a standalone company.

An unexpected side effect of the Beehive was that teams did not want to leave the community they had built. The very social bonds and support that created such positive effects also had the negative effect of creating an environment that was too comfortable. The image of an incubator as a warm comfortable place to hatch eggs comes to mind and starts to haunt us. Fortunately for us, we had two forcing functions – many of the students were on the verge of graduating, and the extra space we had for the program was temporary due to an impending renovation of the building.

Does that mean that the Beehive experiment was a failure? Absolutely not. But while we would enthusiastically do it again, we would redesign the program. What made the difference between these two programs, and how specifically would we redesign the Beehive program to be more effective? A lot of it boils down to a simple chart: 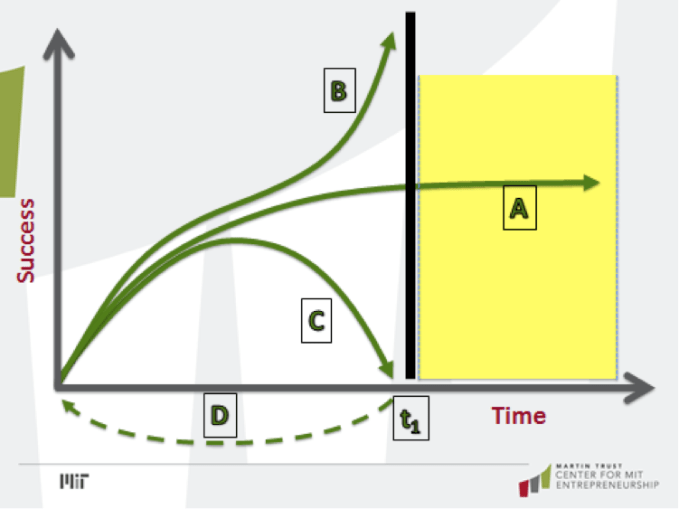 Teams participating in the Beehive tended to follow line A on the graph, in which they made initial progress but stagnated over time. By contrast, teams participating in the FSA underwent several forcing functions throughout the program. Within the first 30 days, they put their ideas (and teams) to rigorous testing, so that by the end of the month (“t1” on the graph), they either had to show they were on the path to great success (line B), or they had to scrap or significantly revise their idea (line C). The individual components of their business were regularly scrutinized, as well.

Now, you may say, “Of course line B is the goal, but it’s hard to achieve. Isn’t the moderate success of line A better than the failure of line C?”

The answer is an emphatic NO! Companies following the path of line A are the “barely living.” Their rate of progress has slowed to near-zero – significantly less progress than they could make doing something else, both for the entrepreneur’s benefit and society’s benefit. As the rate of progress slows, the entrepreneur’s rate of learning slows, making them less-prepared for tackling the challenges of future startups. The startup will last only as long as the money does, if the entrepreneur doesn’t lose interest first.

In these two cases in particular, the defined time period, hands-on mentoring, and uncompromising board-meeting sessions resulted in hard decisions being made sooner rather than later, with no option to choose a ‘comfortable state.’

By contrast, companies that follow the path of line C don’t waste time and money doing something that doesn’t work. In failing, they learn a lot about how to improve. They are ultimately on a better path to end up on line B with a successful company. Some may even decide, after enough line C failures, that they do not want to pursue entrepreneurship, giving them the opportunity to establish a career years earlier than the stagnant startup stuck on line A.

Therefore, a well-designed accelerator will force its participants onto either line B or line C by default, preventing or at least dramatically reducing the occurrence of line A. And we found in the FSA that teams that followed line C were able to quickly retool and establish strong businesses along line B.

An example is Loci Controls, which started out as an idea involving network-connected solar panels. A few weeks into the FSA, they saw major shortcomings both with the idea and the composition of their team. They added a team member and began exploring turning landfill gas into energy. They have seen a lot of success, and were just funded by CommonAngels. A second example, from our 2013 GFSA class, started with a very specific medical idea, and realized within two weeks under the pressure of the GFSA that they were not on line B. They regrouped and developed a new venture, ImSlide, around power line de-icing that was much more successful for them.

In these two cases in particular, the defined time period, hands-on mentoring, and uncompromising board-meeting sessions resulted in hard decisions being made sooner rather than later, with no option to choose a “comfortable state.”

Our experience with the Beehive is in line with other data about incubators. Dane Stangler, the vice president of research and policy at the Kauffman Foundation, reports that “Multiple studies have shown that incubators don’t work and, worse, they frequently subsidize companies that would otherwise fail. One report suggested that 90 percent of public and private incubators in the U.S. were ineffective. True, there are a handful of successful incubators, but incubators suffer from a design flaw: they are more often about real estate than entrepreneurship.”

As for accelerators, the data is not in yet, but MIT’s experience is encouraging. One key question to consider is whether the success of teams coming out of accelerators is due to the accelerator’s ability to attract and select great teams (sorting or selection value) or to the actual added value created in the program (added value). MIT professor Yael Hochberg pointed me to a study done by Columbia professor Morten Sorensen that showed in venture capital deals that 60 percent of the value created is based on selection value, and only 40 percent is added after the selection.

Our FSA/Beehive experiment reduced the selection bias as much as possible, and we were still able to see a significant improvement from teams in the acceleration model versus teams in the incubator model. It makes sense to me that when a team is forced out of its comfort zone, it will rise to the occasion far more than a comfortable team; it is why I channel Eleanor Roosevelt and tell teams “to do something every day that scares the daylights out of you” if they want to be great.

Programs can and must be thoughtfully designed to avoid stagnation and instead provide a positive impact on entrepreneurial growth.

We will certainly do a program similar to the Beehive in the future, because the number of MIT student entrepreneurs is vastly more than the FSA’s super-high-touch model can support. But we will make it more of an accelerator than an incubator, incorporating lots of time-defined forcing functions and a more hands-on mentorship approach. This has also influenced how we design the accelerator program going forward. An overview of our continually evolving accelerator program is available online.

We hope this insight can also help future programs elsewhere to be better designed and for entrepreneurs to understand the strengths and weaknesses of each. “Incubator” and “co-working” spaces (which, due to the great economies of scale they provide startups, often resemble incubators in function) can have a positive role in a robust entrepreneurial ecosystem, but their limitations should be known and carefully considered.

Programs can and must be thoughtfully designed to avoid stagnation and instead provide a positive impact on entrepreneurial growth. This experience reminds us that “comfort” is a word that negatively correlates with great innovation and entrepreneurship.