TechCrunch has discovered a big, unannounced marketing tool from Facebook called Business Manager that lets teams at enterprises and agencies manage multiple ad campaigns and Pages in one interface. There’s just one problem. Business Manager could directly compete with Facebook’s Preferred Marketing Developers who it has historically left to serve these lucrative customers.

We learned of Business Manager from a tipster, and Facebook confirms to me that it is an unlaunched product that hasn’t been revealed to the public. It went into “focus release” with a select set of clients a week ago, and will be fine-tuned before being rolled out to everyone. Facebook didn’t provide a timetable on when that will happen.

[Update: 4/28/14: Facebook today officially launched Business Manager, confirming the details of this story.  The company wrote “Business Manager is currently available to a limited number of US advertisers. We plan to roll out internationally within a few weeks.”]

Facebook’s marketing tool strategy to date has been to build simple, basic native tools for small businesses and APIs to enable developers to build more powerful, customized tools for large marketers. Facebook’s Preferred Marketing Developer partners then use these APIs to build enterprise level social media publishing, marketing, and monitoring tools as well as efficient ad tools that can A/B test and shift spend between thousands of ad variants. 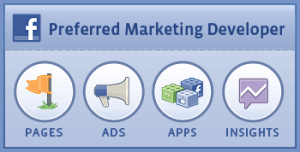 These APIs spawned a whole industry of well-funded startups, some of whom had big exits. In Facebook Page management there’s Buddy Media (Sold to Salesforce for around $745 million, Involver, Vitrue (sold to Oracle for $300 million), Wildfire (sold to Google for $350 million plus big retention bonuses) and many more. In ads there’s Nanigans, Ampush, Kenshoo, AdParlor (acquired by AdKnowledge), Efficient Frontier (acquired by Adobe) and a slew of other. If a small business wanted to run a few Facebook ads themselves or publish posts to their Page’s fans, they could do it through Facebook’s free, native, self-serve tools.

If bigger companies or agencies wanted to compare click through rates of thousands of ad headlines, have a team of humans moderating posts to a Page’s wall, or track how their Page and ads performed in tandem, they typically had to license a third-party tool from one of Facebook’s PMDs.

But Facebook’s Business Manager offers a lot of those features for free within Facebook. It’s the latest step in the long-running commodification of Facebook marketing services I’ve been watching since 2011. Facebook makes improvements to its native marketing services, and third-party are forced to find new, deeper ways to find value. For example, Facebook added post scheduling and basic Page admin roles in May 2012, which prodded enterprise tool makers to stay a step ahead by building in content creation assistance and rich admin permissions with more granularity than Facebook’s native tool.

Business Manager takes support for teams and the integration of paid and owned media to the next level. It lets brands or agencies manage their Facebook Pages and ads in a single interface. It fully separates each user’s professional and personal Facebook data, and allows them to set up permissions and payment access for team members who aren’t their Facebook friends. Facebook’s also set up migration to Business Manager so it won’t interrupt or change existing ad campaigns or content pushes. You can watch Facebook’s intro video for the product here, which I’ve scraped and embedded in case Facebook takes it down.

The problem was that before, marketing team members at agencies and big companies were worried about mixing their personal and professional presences on Facebook, so they’d create a fake shared account to use for ad and Page management. But these fake accounts are against Facebook’s terms of service, require users to remember extra sets of login credentials, hamper security since they’re not tied to one person, and their pseudonyms make it confusing to give the right people permission to post or buy ads. Business Manager smooths this out. 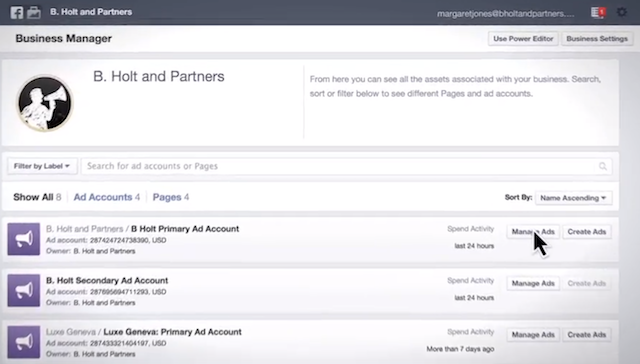 Amit Lavi, co-CEO of social marketing firm Marketing Envy explains that Business Manager could make it so “1. You no longer need to friend a user in order to give him management access to your page 2. You don’t need to know the email associated with a person’s Facebook account in order to give the access to your ad account 3. Large advertisers can switch funds between accounts independently without waiting for their FB rep thanks to centralized payment methods.”

But Lavi says that the tool could pull business away from Facebook’s partners, “My experience from both working at Facebook and with agencies is that account management, permissions and finance are the biggest hassle and consume a significant amount of time that should be dedicated to the core business of managing campaigns for clients. Facebook’s PMD partners are not going to be happy with this product as Facebook continues to copy successful third-party features for its own platform.”

[Update 5pm PST: Facebook contends that Business Manager wasn’t secret but instead unannounced. “We’ve started rolling out this tool – and continue to roll it out – with businesses, agencies and PMDs,” a spokesperson says. “We’re also working on API availability so that PMDs can build it into their tools and interfaces, as well as build their own proprietary tools and interfaces on top of it – just like they do with our ads API.” This could give developers an opportunity to cooperate instead of compete with Facebook.]

Business Manager certainly can’t substitute for the custom software development many top-tier PMDs do for big brands and agencies, and it doesn’t replicate their more advanced features. But Business Manager could be good enough for some clients of simpler Page and ad management tools to switch to Facebook’s free native ones. Permissions and combined ad/page interfaces are commonly listed as selling points for third-party Facebook marketing software.

These startups will either have to endure the added competition, or innovate to create new value propositions beyond what Business Manager offers. Facebook may be using its muscle to beat out companies it calls its partners. That’s a risk of building on a centralized platform. But Business Manager should also be seen as a catalyst for developers to improve. In the end, Facebook is democratizing access to tools that make the content and ads people see in its sites and apps more relevant and less annoying.