What things do you want to accomplish before you die? What’s on your “bucket list?” Me, I just want to take one solid, multi-hour nap, but I know there are people out there with slightly larger goals in mind. For them, a new mobile application called, heh, BucketListly, works to serve as both a motivational dream journal and a way to share your travel experiences and stories with others.

Because going to new places is on everyone’s bucket list, of course.

The mobile application is actually a spin-off from the BucketListly website first launched back in October 2012 by Pete Rojwongsuriya, the Thai founder best known as the creator of the MyColorScreen.com website and its community for Android designers. (He recently sold that site to the U.S.-based startup behind Themer, an Android customization utility backed by half a million in outside funding.) 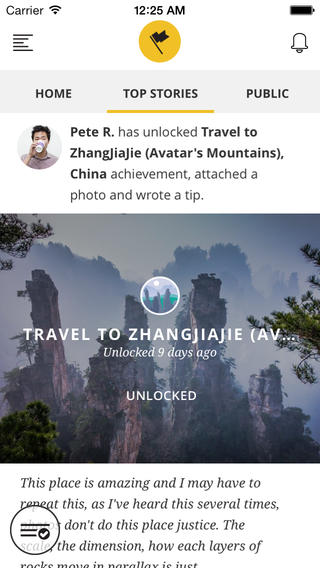 Rojwongsuriya says he got the idea for BucketListly when he had to go on a business trip to Beijing.

“It was my first time giving talks and first time traveling in China, and I wanted to have a way to keep track and accumulate all of these ‘first-time’ experiences,” he says.

After selling MyColorScreen, he began to travel more actively, and has been trying new, and sometimes extreme, activities, like climbing volcanoes, for example.

“I realized that the information I’ve been gathering to do all these activities could be useful to someone who is starting out, and so that became the main focus of BucketListly: to share my travel stories, experiences, inspire others to do the same, collaborate with each other, and keep track of everything I’ve done,” Rojwongsuriya tells us.

In December, he redesigned the web version of the service with a larger focus on the travel sector, and an early version of the iOS application debuted on the App Store in mid-February for testing purposes. The updated app, bugs in check, rolled out earlier in March.

To date, the service has reached over 7,000 users, with over 4,000 photos uploaded, and 89,000 “achievements” unlocked, which includes a variety of activities like adding goals, collaborating with others, and sharing details about your moments. 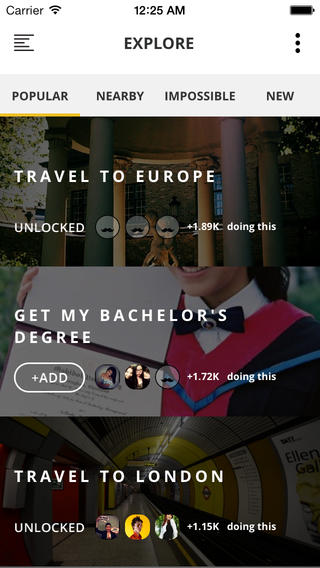 Though I could do without the “ly” on the end of its name, the app itself is beautifully designed and easy to use. You can sign up via Facebook or email, and it then lets you quickly start adding goals to your list. If you need a little inspiration (as, ahem, clearly I do), you can also explore other popular goals, as well as “nearby” goals, “impossible” goals, and more. (In case you’re wondering, “impossible” goals are more “improbable,” and include things like breaking world records, traveling to space, or winning the lottery, for example.)

BucketListly also has a social element where you can find and follow others, read users’ top travel stories, and browse and comment on stories posted to the public feed.

For now, Rojwongsuriya says his focus is on building an audience for the new iOS application, but longer-term, he will work to integrate the service with travel and adventure companies, as well as expand into affiliates and advertising to generate revenue.

BucketListly, which competes with (and in my opinion, easily bests) other “bucket list” apps like BucketList, my BucketList, iWish and others, is a free download on iTunes here.