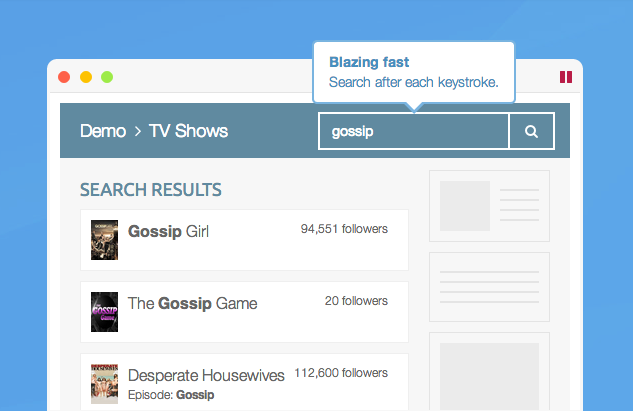 Real-time search startup Algolia has been doing very well over the past few weeks. Slowly but surely, its search API is taking over every search engine on your favorite websites. The company also launched a new data center in Asia to improve response times with Asian users.

As a reminder, Algolia is a developer-friendly hosted search engine for your website. After adding a few lines of codes, customizing the interface and sending JSON-formatted data, your site is ready to go. For your users, everything happens in real time, and results change with each keystroke. It’s like Spotlight on OS X, but on a website.

“We now have paid clients in 15 countries, but Asia remained a weakness,” co-founder and CEO Nicolas Dessaigne told me. “We had too much latency with our servers until today. That’s why we are opening a data center in Singapore for our users in Asia and Australia.”

Finally, big websites can work with Algolia to set up their search engines in multiple data centers. While the company has been around for more than a year, its growth picked up in the last few months. In October 2013, it handled 4 million API calls per day. Now it serves around 30 million API calls a day.

Recent clients include Vestiaire Collective and USA Today’s Reviewed.com. Part of Y Combinator’s current batch, Algolia now powers well-respected hacker-oriented websites, such as Hacker News, Product Hunt and GrowthHackers.com. It is trying to become more popular among developers so that they think about integrating Algolia in their next projects. And the user experience speaks for itself.