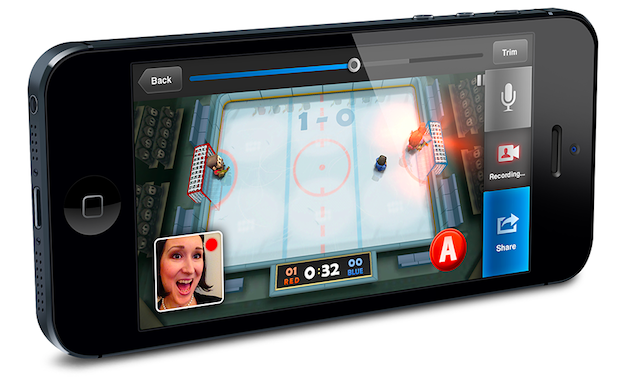 Your friend takes out his phone. “Duuude — You’ve gotta see this game,” he says, before showing you a particularly crazy scene.

Is there really any more effective ad for a game?

Unity doesn’t think so. That’s why they just bought Applifier, a company that helps developers add instant-replay type recordings to their games.

If you haven’t heard of Applifier, don’t feel too bad — they’re kind of a behind-the-scenes sort of deal. One of those companies that make things to help other people who make things.

One of the things they make is called Everyplay. It’s an SDK that allows mobile game developers to quickly add replays to their game — allowing gamers, in turn, to record and share awesome things that happen while they play. When you do something cool in a game, you tap the record button, select which chunk of the pre-recorded footage you want through a DVR-style interface, and share away on Facebook, Twitter, or Everyplay’s own video network.

If you haven’t heard of Unity, though, that’s on you — they’ve been pretty important in the game development scene for a while now. Their thing? They make a game development engine that lets you build a game once, and run it natively on an absurd number of platforms — iOS, Android, Windows Phone, BlackBerry, Windows, Mac, Linux, etc. — with minimal code changes. In the past 30 days alone over 600,000+ developers have worked on a Unity project, Unity CEO David Helgason tells me.

The immediate goal of the acquisition is simple: better Everyplay/Unity integration. Everyplay already works with Unity, but Helgason tells me that he wants adding replay/video sharing support to be “a matter of clicking a checkbox”.

One cool detail that Applifier CEO Jussi Laakkonen mentioned: Everyplay’s video recording system actually works without slowing down the performance of a game, which, given that video transcoding is pretty resource intensive, is a bit counter-intuitive.

How’s it do it? By tapping the right dedicated hardware. Most iOS/Android smartphones have chips inside dedicated to encoding video, used primarily for working with your camera. But when you’re playing a game, those chips generally aren’t doing a whole lot. By pushing the video game replay encoding legwork onto these chips, your phone’s CPU/GPU remain free to crunch away at the game itself.

Terms of the deal weren’t disclosed (we’re diggin’ for more, of course), but given that Unity wanted the technology and that Applifier has upwards of 40 employees, it certainly sounds like it was more than a mere acqui-hire.