Customer reviews are the backbone of sites like Amazon (where they have turned into a platform for some of the most inspired comedic writing on the Internet), but it can be difficult for smaller retailers to convince shoppers to leave feedback. Orankl, a Y Combinator-backed startup, wants to give all e-commerce businesses the same tools as their larger rivals.

The company’s first product is a review system that can be installed with one click on supported platforms like Shopify or by copying-and-pasting a few lines of code. Feedback forms automatically match the style of each site and the system generates emails that remind customers to leave a review. The startup says some of the sites that have already installed its review system have increased sales by 15% to 20%.

The review system is part of a “broader vision” for Orankl, says co-founder João Batalha. The company has already launched an email marketing platform and is working on a recommendation engine.

All four members of Orankl’s founding team–brothers João and Luís Batalha, Micael Oliveira, and Craig Kochis–met while studying at MIT. After graduating, João Batalha and Kochis worked at social commerce site Lockerz, where they saw the importance of reviews in driving user engagement and sales.

“A lot of people don’t realize how important reviews are. Amazon puts a lot of effort into things like Amazon Vine, where they give out things for people to review. They get around 35 reviews per second and it drives a lot of sales,” says Batalha.

The massive number of reviews on Amazon means that shoppers often make it their first destination while researching a product. Of course, that makes them more inclined to order from the site, too, even if there are other online retailers that offer the same item for less. 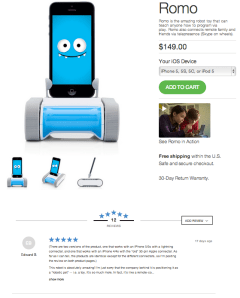 Batalha says reviews benefit less well-known vendors by helping assure shoppers that their site is legitimate. It also gives sellers a chance to show off their customer service by addressing complaints in a public forum. Many of Orankl’s current clients manufacture their own products and use the review system to survey customers or message them privately.

One example of a smaller retailer that has successfully built a rich database of product reviews is headphone seller HeadRoom because its niche market of audiophiles are engaged and very opinionated.

“They have a community of shoppers who are always there and leave reviews. Regardless of what kind of review system they use, users will leave an opinion,” says Batalha. “But to get an average person to leave a review, you need to optimize it.”

In order to get customers to leave reviews, many sites offer incentives like discounts or free shipping. Orankl’s goal, on the other hand, is to achieve a high conversion rate without costing retailers money.

The system automatically sends an email to customers soon after they receive an item. The startup originally embedded a review form in the message, but that didn’t work with all email clients. So they took out the form and replaced it with a star rating system. Once customers select a rating, Orankl takes them to a form on the retailer’s site where they are encouraged to write feedback.

Batalha says this one-click system has scored a 20% conversion rate. The startup also wants to develop better ways of organizing reviews, instead of just sorting them by rating, and find ways to move away from the standard five-star system.

Orankl focused on email marketing next because it can be much more effective than social media, but promotional emails that attract shoppers instead of getting tossed into spam are hard to write.

Orankl automatically creates and sends out emails with product recommendations based on data they collect across sites using their review system. It looks at when individual users are most likely to shop, what kind of products they look at, and what they ultimately purchase.

The startup’s next step is to build a recommendation system that will market items to shoppers based on their activity across all stores using Orankl’s e-commerce tools.

“There are strong network effects as we get more and more stores using our system, because the information we get for each user comes from a number of stores instead of just one,” says Batalha.