Cubby, the Dropbox competitor from LogMeIn which opened up publicly near the end of last year, is rolling out a business-focused version of its service called Cubby Enterprise. The company is aiming to find a middle-of-the-road spot in between clunky, but I.T.-friendly solutions employees hate, and the consumer-grade cloud services that I.T. is still wary of.

The Enterprise version includes a similar feature set for end users, like the ability to turn existing folders into online “cubbies,” and cross-platform access to files from desktop and native mobile applications on iOS and Android. In addition, the new offering provides 1TB of cloud storage to be shared between every five users who sign up. Users can also collaborate by inviting others to a cubby to either make changes or just view files.

And for the IT department, Cubby offers a number of enterprise-ready features, including support for single sign-on through Active Directory integrations, domain-based administration, remote deployments, device wipe, policy settings, activity logs and filtered and monitored search. 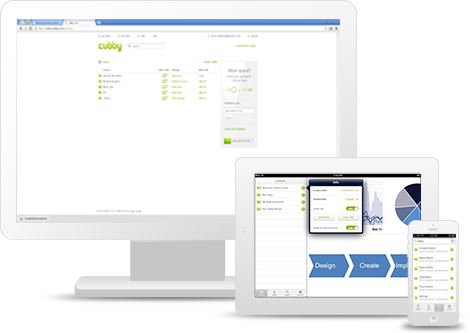 The subscriptions are sold on an annual basis, beginning at $39.99/month per groups of five users. This now becomes the third tier – a “teams” edition – for the Cubby service, which also includes Cubby Basic (free for individual use) and Pro (individual premium).

We asked the company if it could share some figures related to Cubby’s initial traction, especially because it’s a new entrant in an already hot space where strong competitors like Dropbox, Box, and Google Drive are today fighting for online dominance. LogMeIn says that while the company isn’t prepared to offer customer counts or growth rates, it would say that free to paid conversions are in line with other LogMeIn products, which have been publicly reported to be in the 1-5% range. Revenue and usage have been consistent with other successful LogMeIn products, too, we’re told.

The company says those figures are better when customers are already users of other LogMeIn products, like LogMeIn Pro or Central, or its online meeting solution join.me, and it does especially well among its now 100,000-plus SMB IT customers. “Both our IT experience and our IT customer base become key advantages in a competitive market,” a representative for LogMeIn explained, while detailing these figures.

That may be so, but the consumerization trend in IT means that no matter what IT may recommend or provision, users often still find a way to use the services they want instead, which may not always be Cubby.

In February, the company reported that LogMein’s cloud collaboration business (meaning, join.me + Cubby combined) were the fastest growing part of its business in 2013 from a revenue perspective, and its expects it to grow in the 35-45% range in 2014, ahead of LogMeIn’s overall business, which is growing in the 20% range.

Correction: Referred to this at one point as “LogMeIn Enterprise” in the post. It is actually “Cubby Enterprise,” as indicated correctly in the headline