The problem with navigation applications is that they assume you’re trying to find your way from Point A to Point B right now. They don’t permit busy travelers to pre-plan their trips in advance, and they don’t help you with the last leg of the journey – finding parking – either. A new application called Spot On Time wants to change that.

From a company called OT Mobility, Spot On Time is a subscription-based service aimed at those who do a lot of driving, whether salespeople on the road visiting potential clients, or just busy parents trying not to be late to pick up at school. 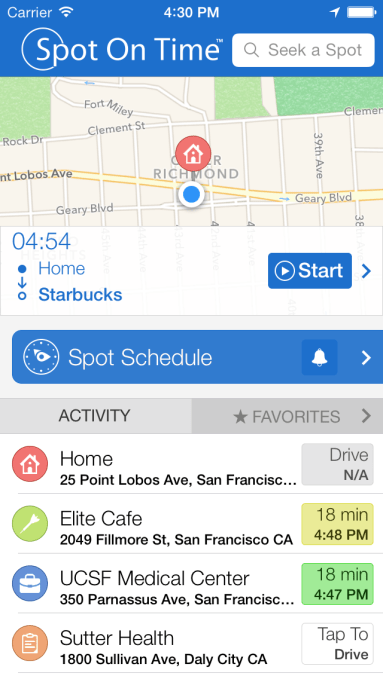 What makes the service different from your typical navigation application is that it lets you pre-plan your trips, by having you enter in your final destinations and times you need to be there as far in advance as need be. You can also configure repeating trips, like if you always grab a Starbucks on your way to work, for example. The app will then alert you when you need to leave in order to reach your destination on time.

On the way, drivers can follow turn-by-turn navigation powered by TomTom. And when you arrive, Spot On Time will even help you find a parking garage, then offer you walking directions from the garage to your final destination.

OT Mobility CEO Dave Rothschild, who has had an extensive career in tech including both at startups and bigger companies, like Netscape, Apple, HP, Sun and most recently, Motorola Mobility, says he’s not exactly the “founder” of this company. That credit would go to OT Mobility’s unnamed strategic investors who did the research, and then brought him on to translate that research into a viable product. 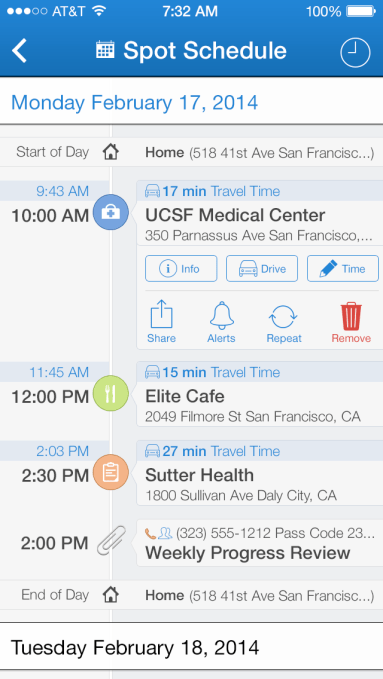 That being said, Rothschild seems fairly passionate about the problem the company is trying to solve.

“The problem of driving to places on time is pretty deep, and a number of drivers were already doing it, but they were doing it from knowledge in their head, from calendars, and from nav apps,” he explains.

It’s worth pointing out that only a week ago, a new application called ETA launched, also built on the back of the mapping giants. ETA is a simpler app, offering just the time it takes to walk or drive to given destination, and a button to launch the turn-by-turn navigation in the mapping app of your choice. (Rothschild notes that what ETA does is basically a feature in Spot On Time.)

But while ETA is a one-time fee per download, Spot On Time offers a paid ongoing subscription – something Rothschild says is needed because it licenses a real-time traffic feed to help drivers know when to leave and what routes to take or avoid. A number of pricing plans are available, but the most affordable is the yearly subscription at $39.99.

Based in Campbell, California, Spot On Time is a team of ten full-time, including also head of engineering Brian Smartt, previously of Google and Dash Navigation (acquired by BlackBerry, then called Research in Motion, in 2009).

The app is available on both iOS and Android.