Moven, a mobile banking service similar in some respects to recently acquired Simple, exited from beta this week, meaning users no longer have to request an invite to sign up for an account. Now publicly available, the company is allowing users to open a bank account directly from their smartphone, which can be funded through external transfers and/or direct deposits.

For background, like Simple, Moven is not a bank itself. Instead, its accounts and associated MasterCard debit card are backed by CBW Bank, an FDIC member based in Kansas.

Also like Simple, Moven’s focus is more so on the front-end of banking – that is, the consumer-facing user experience. Within the mobile application, users have access to real-time updates and spending alerts, spending analysis across all their bank cards and credit cards, the ability to send money to friends from the app via Facebook, email or their mobile number, and the ability to suspend and unsuspend their account directly from the app in the case of a lost or stolen card, among other things.

You’re even able to see a map of your social events (courtesy of the Facebook integration) and how those coincide with spending behaviors. The company says around half its users connect with Facebook to tap into Moven’s social features.

Overall, the idea here is that what many consumers today want from their banks are better ways to help them spend and manage their money, and traditional banks don’t really deliver on this. But what makes Moven a bit different from Simple, which also targets this group of consumers with its ease-of-use and spending analysis features, is that Moven gives users the ability to manage other bank accounts and card accounts within its app. That way, Moven can offer a more complete financial picture of someone’s accounts, since they can see their activity across other banks and cards from the app.

The Moven mobile application itself is not new to be clear. The app first debuted in mid-2013, and was initially friend and family focused before launching its early invite list. However, this is the first time that users have been able to sign up for their Moven account within the application itself.

Despite having been closed to the broader public, Moven has grown to 5,000 registered users and over 100,000 have signed up for invites. And it has helped manage over $300 million in customer spending. (The company declined to say how much is has in funds under management, however). Around 60% of Moven’s users link at least two external accounts, we’re told. 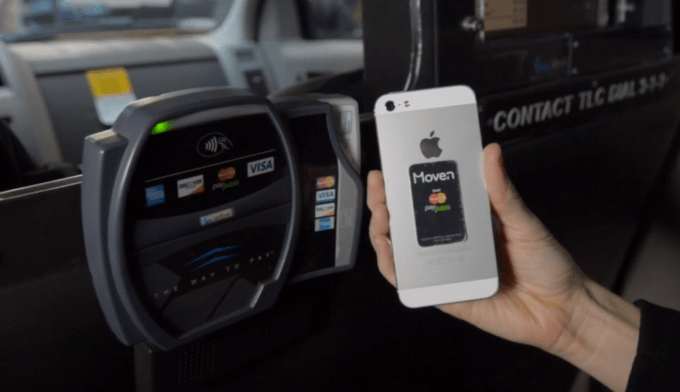 Currently, Moven provides customers with a plastic card as well as a MasterCard PayPass sticker, which you can affix to the back of your phone for contactless payments at supported point-of-sale terminals. Going forward, Moven is looking into launching Host Card Emulation (HCE) so it can do away with the need for plastic in future versions. It will also be beefing up security features – for example, alerting customers if fraudulent spending is suspected.

Overall, Moven’s feature set is notable, and in some cases even tops that of Simple, or other more modern mobile banking/payments apps like Amex’s Serve, for example. But the app’s user interface is still a little rough around the edges in parts, when compared with the more polished Simple app, at least in my opinion. (You may feel otherwise.)

The NYC-based company has raised $4.4 million in funding from various fintech investors and angels like Kevin Plank, founder and CEO of UnderArmour, plus Esther Dyson and David Rose.

Moven is available for both iOS and Android.