“We want to enable straight playback from Spotify on other services,” CEO Daniel Ek tells me. It’s part of why his company just acquired The Echo Nest, the top music personalization and discovery API in the industry. “We’ve both invested in platform approaches to music,” EchoNest’s CEO Jim Lucchese explains. “To combine those creates such a cool opportunity for developers anywhere that music lives.”

In a joint interview with the two CEOS, Ek tells me the acquisition was a natural fit. “We have a long relationship with the guys at Echo Nest that stems back to 2007 before Spotify was even launched as a service publicly. We’ve been working together for a few years. We look at the world in the same way.” Their mutual mission? “Getting people to listen to even more music” Ek says. “It was pretty clear that the best way to do that was to be one company and not two separate ones.”

Lucchese echoes that, saying “Ultimately, we both are obsessed with connecting more people to more music. Combining our understanding of music with Spotify’s technology, platform, catalog, and huge audience will allow us to do that on a scale that wasn’t possible otherwise.”

Spotify As A Music Identity Layer

There’s one big thing missing that could help Spotify accomplish that mission. Until now, Spotify has been focusing on becoming an omni-jukebox with on-demand streaming, radio, algorithmic discovery, and curated playlists. In August I took a deep look at how Spotify wants to be everything to everyone. But it’s not everywhere yet.

Spotify’s massive catalog of on-demand music has largely been locked within its own apps. That’s a drag. If I pay for a premium Spotify subscription, it seems reasonable that I should never get cut off after a 30-second sample of a song, no matter where I’m listening.

Spotify does offer embeddable songs and playlists on the web, an app platform within its desktop software, and a bare-bones API for quickly jumping from other apps to its own. But there’s an opportunity for Spotify to become something much bigger: To be the music identity provider across the web and mobile the way Facebook has become a social identity provider.

Imagine being able to authenticate your Spotify account in other apps the way you sign in with Facebook today. But instead of bringing your social graph and bio data, Spotify Connect would you let you listen to full songs and your playlists on demand in whatever app your wanted. Essentially, it would set Spotify’s app platform free from its green walls, and let legal music bloom all over the Internet.

Spotify could solve the music licensing problem for every developer. WillCall or Applauze could let you listen to artists with upcoming concerts in your city without booting you from the app. Shazam or SoundHound could play you the full song you just caught the end of on the radio. Or you could pipe in a soundtrack to your favorite games.

Think how much more valuable and attractive a Spotify Premium subscription would become. This platform play could get more people paying for music again.

As of December, Spotify had 26 million users and 6 million paying subscribers, but it will need more if it wants a widely anticipated but unconfirmed IPO to sound good to investors. For now, it’s relying on a $250 million round raised from Technology Crossover Ventures in November to help its ad engine come of age, and Bloomberg says it’s working on getting a credit facility from banks.

It may take some time for this all to come to fruition, but with the acquisition of The Echo Nest, Spotify is now a much more API-centric organization. Plus, Spotify took a huge step in that direction with the beta release of its first real iOS SDK. It lets developers build Spotify music playback, search, playlists, and metadata playback directly into their iOS apps. Similar functionality for Android and the web could make the “Spotify Everywhere” dream a reality.

As for the immediate effect of the acquisition, Lucchese acknowledges the “direct competitive concerns” of some of Spotify’s Echo Nest-powered rivals, including Rdio, Rhapsody, Vevo, Mog, and iHeartRadio. No one wants to be standing on a rug that their competitor could pull out from under them. “They always knew this was a possibility and there were contingencies in our agreements for those eventualities,” Lucchese explains. “We’re going to honor our contractual obligations with all of them and we’re going to sit down with them to figure the best plan going forward.” 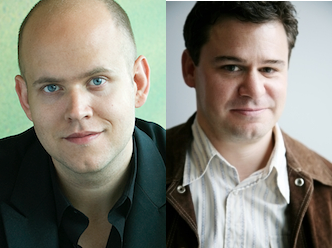 Spotify is sometimes criticized for turning the dollars earned on CDs into tenths of a penny in royalties per stream. But Ek says The Echo Nest deal and Spotify’s roadmap could help more artists earn a living by getting people “listening more, or loving a song and buying it on iTunes, or getting them to go to shows. It’s ultimately going to be great for artists.”

In the end, the deal is for the listeners. Lucchese says The Echo Nest and Spotify both have “music hacker cultures. We move quickly. Our goal is to start pushing things that will have a real impact on the [Spotify] user experience as soon as possible. I think probably in the next three months you’ll start seeing things in Spotify based on what we did here today that will have a big impact on music fans.”

These improvements to Spotify’s radio algorithm, discovery suggestions, and more could come even sooner, Ek says. “I expect to see things that touch consumers really, really fast. You’ll start noticing improvements pretty much instantly.” Still, when asked if acquisitions are becoming a major part of Spotify’s game plan, Ek says, “No, it’s really not. I think Echo Nest is a pretty unique company. I view this as more of a one-off than as more of a bigger strategy.”

But with the record labels’ approval and funding, Spotify, one of the most complete streaming catalogs in music, and now the best data treasure trove in music, might not need to buy anyone else for a while. “This is a game-changing deal for the strength of Spotify,” Ek says. “I don’t think people realize that Spotify is a platform company.”