If you picked B — hooray! You’re right.

After finding many, many millions of players on iOS, QuizUp is hitting Android for the first time this morning.

In case you’ve missed it until now: QuizUp is a head-to-head trivia game, with a couple hundred thousand questions spread out across some 400 topics. Each topic has its own leveling/rank system. Love Breaking Bad? Play the Breaking Bad category. Read too much TechCrunch? Play the Tech category. If someone’s obsessed with it, there’s probably a QuizUp category.

QuizUp first showed up on the App Store back in November of last year, and it quickly did pretty damned well for itself. It found its place in the App Store’s overall top 10 free ranks almost immediately, and stayed there for a solid 3 months. While it’s dropped a bit in the past few weeks, it has yet to fall out of the top 100. 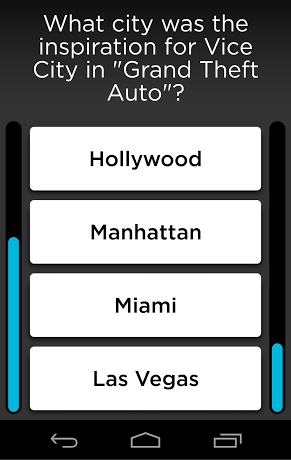 [Disclosure: CrunchFund, a VC fund lead by TC co-founder Michael Arrington, is an investor in Plain Vanilla. I don’t think Mike has ever so much as mentioned this game to me, but I prefer to be transparent about this stuff.]

Besides just being rather pretty for a simple quiz game, QuizUp has at least two specific features that have likely helped tremendously in its success: very well done asynchronous gameplay, and user-generated content.

The first allows you to play against your friends and random Internet strangers in faux-real time. It feels like they’re playing right now, but you’re actually playing against a pre-recorded set of answers they’ve given previously. You’re never waiting ages for someone to take their turn, and there’s never a shortage of people to play with.

The latter — the user-generated content system — allows users to submit new questions on their own, allowing the game to have so many topics that there’s a little somethin’ for everyone.