Another startup aiming to simplify the process of prototyping electronics by doing away with the need to wire up breadboards has taken to Kickstarter.

This latest one, called AgIC, combines the approaches of two we’ve previously covered — the Ex1 3D printer for PCBs and the Circuit Scribe conductive ink pen — by offering a kit to let people turn a home inkjet printer into a circuit board printer using its conductive ink. 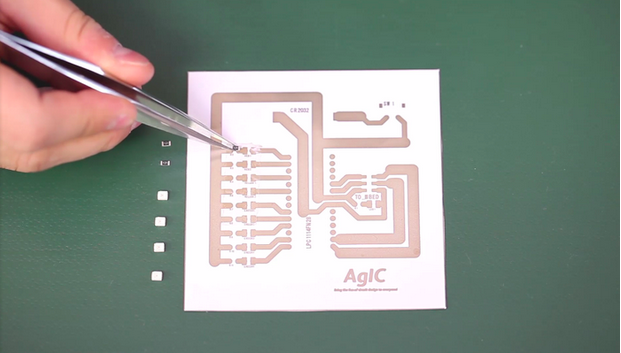 The ink AgIC is also developing can be used in a brush pen so you can draw circuits onto paper in much the same way Circuit Scribe’s ball-point pens work.

Its main play is to transform an inkjet printer into a PCB printer — via a $299 kit that will consist of:

The kit will also include the following developer’s parts to enable circuits to be created atop the printed conductive traces:

Buyers of AgIC’s DIY kit will need to provide their own inkjet printer to transform into a circuit board printer. A subset of inkjet printers will be recommended that work well with the dedicated injection tools. They also recommend buying a new inkjet printer, rather than using one that has already been used for standard printing — to avoid having to clean the standard ink out of the printer’s system.

For $599 they are also offering a full kit — inkjet printer included — that’s already set up with the conductive ink and ready to print. This is still considerably cheaper than the Ex1 PCB printer Kickstarter — which costs $1,499+.

However the Ex1 offers printing on various substrates — such as wood, glass, plastic — not just paper. Its makers are also developing software to make it easier for people to design circuits for printing, for a more holistic product. Whereas AgIC is focusing on the print hardware side only, and suggests people could use existing drawing and painting software such as Adobe Illustrator and Corel Draw to design circuits.

AgIC is seeking $30,000 in Kickstarter crowdfunding to get its kits and ink to market. It’s already close to making that target, with nearly $25,000 raised and still 26 days left to go of its funding campaign. It’s aiming to ship kits and pens to backers by August.