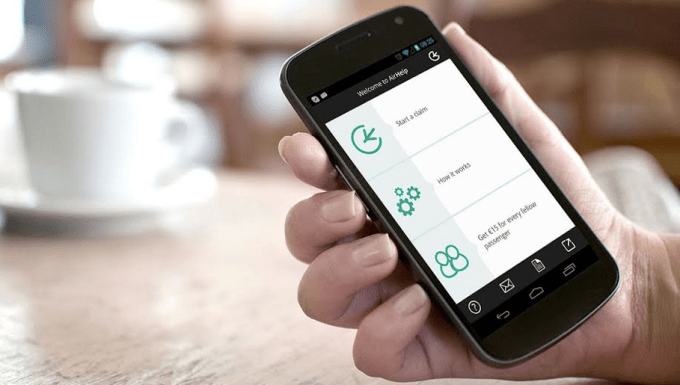 Uh oh! Your flight was overbooked. You’ve been bumped off the flight, and they can’t get you another ride for hours.

Surely, the airline has to give you something, right? But what? A drink voucher? A few extra inches of leg room on a future flight?

Try a couple hundred bucks. AirHelp (part of Y Combinator’s Winter 2014 class) exists to help you figure out when the airlines legally owe you money — and they don’t get paid unless you do.

AirHelp launched in Europe last year, where the company’s co-founders tell me they’ve helped “tens of thousands” of passengers in the past 6 months. Today they’re expanding their service to U.S. domestic flights.

While the dollar amount varies and the laws differ from place to place, airlines in both Europe and the US are often legally obligated to compensate a passenger whose flight they’ve screwed up. What they aren’t obligated to do, however, is go out of their way to make sure you go through the process. They’ll give you a piece of paper explaining your rights — but if you don’t catch the small print, they’re not going to point it out.

[A quick, simplified breakdown: for flights ending in Europe, airlines must compensate passengers whose flights are delayed, canceled, or overbooked. For domestic U.S. flights, airlines are only responsible when they’ve overbooked your flight and have to “bump” you. ]

In Europe, required compensation can go as high as €600 (roughly ~$800). In the US, the compensation can be as much as $1,300. It all depends on how much your original fare was and how quickly the airline was able to get you to your destination, but the rates are set in stone by the European/U.S. transportation departments. (Here are the relevant U.S. regulations and their European equivalents.)

In many cases, getting paid is just a matter of knowing the right phone number to dial, or the right form to fill out… and then being persistent. Really, really persistent.

That’s where AirHelp comes in. You give them the details of your flight, and they’ll check whether or not you’re legally owed any compensation. And if you are? You sign a PDF that gives them power of attorney (with regards to dealing with the airline), and they go hunting for the cash. If you end up getting paid, they keep 25% of it. And if you don’t? You pay nothing.

The company tells me that they’ve gone so far as to take an airline to court when said airline wasn’t following the laws — but even when they have to do that, the cut they take doesn’t change. “We might lose money in some cases,” co-founder Nicolas Michaelsen tells me, “but it sets a precedent that will pave the way for other similar cases. The airlines need to know it’s not okay.”

Of course, there’s a reason that the airlines might try to put up a fight: most of them aren’t doing too hot, financially. While things seem to be looking up, well over a dozen airlines have filed for bankruptcy in the last decade alone — and that’s with most of them already throwing in crazy fees at every opportunity. If everyone starts bangin’ down their door for this money, it’s easy to imagine ticket prices going up overall.

But the laws in place are there for good reason: it may work for a while, but the solution to an airline’s woes isn’t to screw the customer.