Dropbox’s acquisition of Mailbox for $100 million has fueled more interest and development in mobile applications aimed at helping users triage their way through overcrowded inboxes. The latest idea in the making is SquareOne, an email app for iPhone exiting beta today, which will allow users to designate which emails are important and worth their time. But it does this in a different way than typical “priority inbox” scenarios do today.

That is, instead of lumping emails into two broad buckets – “priority” and everything else (like Gmail’s own priority inbox setting does, for those who avoid Gmail’s default tabbed experience) – SquareOne wants to help users configure several different buckets, like “friends,” “social,” “VIP,” “team,” or any other category of emails you see fit to add.

According the company’s young founder and CEO Branko Cerny, a recent Dartmouth grad and, briefly, a Google employee, he came up with the idea for SquareOne while in school, as he became overrun with emails while working as the publisher at the student newspaper, The Dartmouth.

“I started thinking, I wish there was an email client that I could tell [that] I’m busy studying right now, and the only thing I care about is the stuff related to the newspaper, or just stuff from the editorial board, and nothing else,” Cerny says. He started imagining how something like that would work, and this eventually became what is now SquareOne.

Cerny founded the company this past August along with mobile engineer James Mock and designer Sang Lee, previously UI design at Box. Among its first hires were Weidong Shao, who spent five years working on the Gmail/Google Apps team, and iOS engineer Arthur Conner. 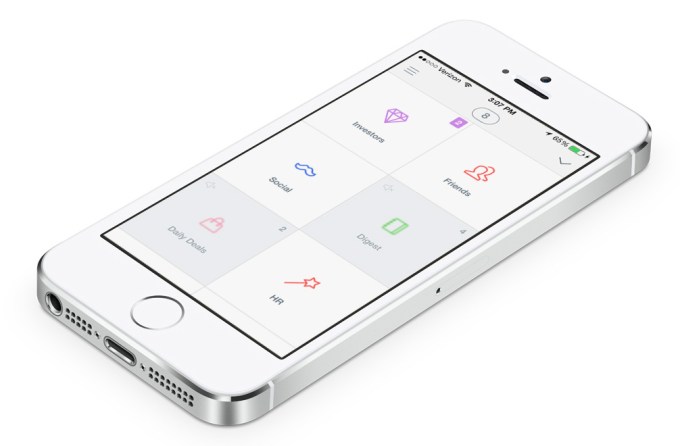 The vision for the product is one that parallels the experience in which top-level executives hire assistants to structure and organize their inbox for them, and then only alert them to the messages that require an immediate response, or as otherwise directed (e.g. “Unless it’s my wife/the CEO/etc., don’t bother me.”)

But when I first tested the SquareOne app this past fall, there was more than a bit of manual effort involved in getting started. The app would set you up with some default categories, or you could also add your own. It borrowed from concepts like Mailbox’s swipe gesture to move you through a sorting process where you swipe to categorize the message’s sender appropriately. Another section would let you use drag-and-drop to add individual contacts to the various buckets.

It’s was very labor intensive, but Cerny told me that the plan was to combine those steps with recommendation algorithms when the app publicly launches.

Today, that has happened. The updated SquareOne is a much more polished experience, even from first launch where it walks you through a brief explainer about why and how to use the application. You then connect with your Google account (the only service supported right now), and give the app permission to manage your inbox and contacts. 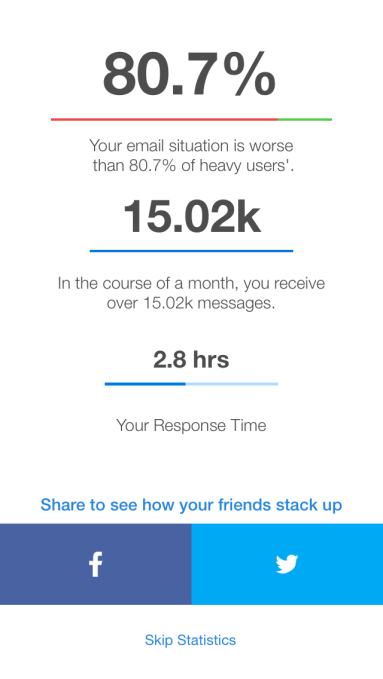 While you wait for the setup to complete, the app offers you some interesting statistics about your own email inbox, designed to strike fear into the hearts of any heavy email user (15,000 emails a month, that’s totally normal, right?) to better remind them of their need for a product like this.

However, the core experience in the public release remains the same: you still, to some extent, have to “train” the product about which email goes where. You do this by swiping left on the email message and then moving it into the bucket of your choosing. As new emails arrive, the app learns where to put them.

You can also silence all your zones, or certain less important zones (like “Digest” for example) in order to reduce notifications, which is a handy feature.

The app probably works best for heavy email users that receive a lot of messages, but not necessarily unsolicited email from hundreds (or thousands!) of senders. You would constantly be training the product, in that case, and that could end up taking more time. 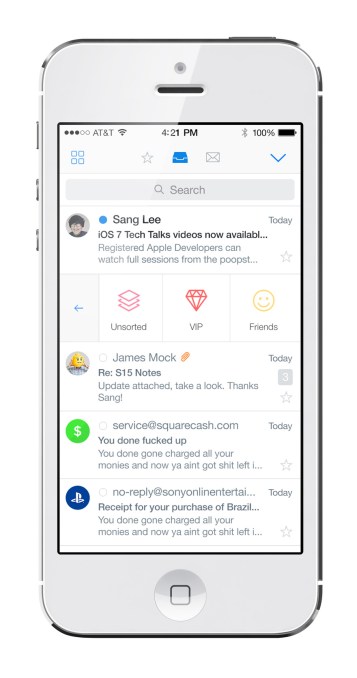 The advantages of selective notifications from pre-configured groups may not be significantly better or more useful than simply referring to a priority inbox grouping, or a “VIP” section (like in iOS’s mail client), even if they are more granular and offer more control.

SquareOne competes not only with Mailbox, but also with a number of other applications used for triage and notifications, including Boxer, Boomerang, Handle, Skimbox, Sanebox, AwayFind and more, in addition to traditional email clients, like the built-in apps on mobile, and those from companies like Google or Yahoo.