Last year, Getty Images began to double down on how it could better control and ultimately make money from its library of 150 million of pictures (and counting) online. The first step was a groundbreaking deal with Pinterest that saw the company get a fee from Pinterest in exchange for metadata about each image. Today, the paid-content stalwart is taking another step in that strategy. It’s releasing a free embed tool for people to use and share select photos from the Getty Images library, which will continue to host and track them.

The aim is to try to get people out of the habit of “right clicking off people.com or CNN”, as SVP Craig Peters described it to me. In other words, Getty wants to stop people simply copying its images willy-nilly — a recipe for no attribution and definitely no payment down the road.

“We’re taking what we see as an already existing use case and putting it into an environment where it is easy and legal,” he says.

So, in the first instance, the tool will be free to use — a pretty big step for a library that has been built around paid content — and will cover around 40 million pictures out of the 150 million that make up Getty Images. 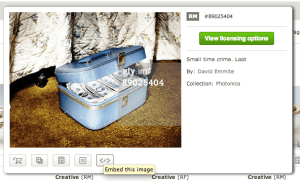 But further ahead, Getty says it will evaluate how to develop the embedding tool. Some of the options for what it could do include adding advertising overlays, paid features, sharing limits and extending it to video. All possibilities, or not — it all depends on how people take to the endeavor.

“Out of the gate we are launching with a link-back and attribution, and we will evaluate monetisation in the downstream,” Peters says, “including how and what ways and over time you might develop alternative revenue models around it. We don’t have a plan to definitively monetise.”

To be clear, Getty already brings in a healthy amount of revenues from blogs like TechCrunch and others who pay (not small) license fees to use its photography and videos. The picture I used here, for example, to illustrate how the embed tools look, has license fees that range from £25 to £579, depending on the size.

This new embed tool is aimed at non-commercial content, so will not apply to them. This is really for Getty to get more embedded into the world of social media and user-generated content a la Tumblr and sites like it that have become popular havens for people freely repurposing copyrighted media.

But in at least one regard, this is a long time coming for Getty Images. The company acquired PicScout in 2011 for $20 million and has been using it to track each and every use of its images across the Internet (creepy, I know). So Getty Images knows just how extensively its library has been used and misused across the web. But Getty Images is going at this very softly-softly.

“If the embed is used for commercial purposes, we could be notifying them of an alternative to using the embed,” says Peters. “We are focused on trying to educate and making users aware.”

But while certain collections will not be embeddable, others very much will be, sometimes out of the hands of the photographers themselves, even. “We won’t give photographers an opt-out,” Peters says.

Interestingly, Getty hasn’t so far inked any deal with Tumblr, or any other site, along the lines of the one it forged with Pinterest, although that hasn’t been ruled out as a blueprint in the future.

“It’s up to Tumblr how they want to work with us,” Peters explained. “We’re open to that [same] type of relationship [as we have with Pinterest]. For now, the embed is one way to provide content in a legal manner. Deals like the Pinterest one make sense for some; for others it will be embeds.” Tumblr and Twitter, and soon WordPress, will appear as widgets on the Getty Site for people to share directly on those platforms.