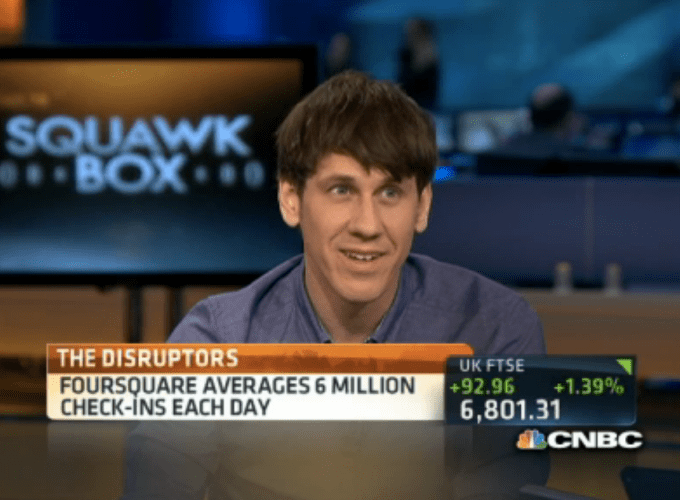 Foursquare — the app that has shifted its business model from a place to track where your friends are going to the go-to place for people searching for local information — is fast approaching its fifth birthday (it’s March 11, for those of you prepping presents). And CEO Dennis Crowley wants us to know that it’s still growing — in revenues at least.

Yesterday, speaking on CNBC alongside Foursquare investor Ben Horowitz, he said that revenues at his startup grew 600% in 2013, and in the first quarter of 2014, they were on track to be up by 500% compared to Q1 of 2013.

Crowley didn’t give concrete numbers, but doing some back-of-the napkin math, and assuming linear growth, that gives Foursquare 2013 revenues of $14 million, and Q1 2014 revenues of $21 million (based on the widely reported figure of Foursquare making just $2 million in 2012).

That’s $1 million shy of the $15 million-$20 million that was estimated for 2013. Still, it is a sign that the company’s ambitions to generate revenues from businesses and other advertising around its app is indeed bearing fruit.

It’s also likely before a licensing deal comes into play with new investor Microsoft to power location across Windows and Windows Mobile services.

What’s also interesting about Foursquare’s revenue growth is that it points to another kind of inflection point for the company, recalling the one Crowley discovered a couple of years ago when he saw that more people were using the app than were checking in).

Foursquare seems to be becoming more B2B focused than ever before.

For an app that had a lot of early adopter, nerdy consumer buzz when it first launched, Foursquare these days appears to have slowed down in terms of user growth. Currently it has around 45 million users, but when you look at downloads, Foursquare has actually been on something of a slight downward trend, judging by the figures over the last year from App Annie. It ranks the app as 51st in the social networking category in the U.S. and 457th overall as of yesterday.

Could that pose a problem longer term? No audience, then no revenues from marketing and advertising, after all. There are licensing deals, and Foursquare has yet to commercialise its API used by zillions of other apps to provide a location layer.

Still, that stall may be one reason why Crowley is also pushing another idea: the concept of Foursquare being used without people even thinking of it.

“A lot of these tools have been designed where, if you want to use them, you have to think about using them,” Crowley said of the wider trend in smartphones and the apps we use. “But what’s starting to happen is that with all the sensors [on devices] you have the opportunity to be smart and contextual. We know when you are in a restaurant you’ve never been in before or a city you’ve never been in before. How can Foursquare come to life when you are not thinking about it?”

(Sidenote: this could come in very handy for the four CNBC journalists chatting with Crowley, who seemed genuinely surprised when he told them that they could use the app to, for example, find a place to eat in an unfamiliar city. “A lot of people don’t really understand what we’re building at Foursquare,” Crowley said forgivingly.)

Of course, given the news of WhatsApp and its $19 billion acquisition by Facebook, they also asked a question about exits.

Foursquare’s been a rumored target for a number of tech companies in recent times, so how much pressure does Crowley feel to sell? “We’ve had plenty of opportunities to sell the company and we turned them down, a number of times,” Crowley said. “What we’re doing is not a sprint from A to B; it’s a marathon.”

Horowitz then agreed with that concept, at least in principle, if not citing Foursquare specifically.

“There are exits involved but it starts with what is the size of the market and are you going to win? From an economics standpoint it doesn’t make sense to sell,” he said.

Citing the story that Yahoo was in a position to buy Google in 2006 but Google said no, Horowitz said that was obviously the right move. “Google was in a bigger market and was going to be number one, but if you are not going to be number one and a company can help make you that then that is an interesting opportunity.”

Time will tell on which side of that equation Foursquare will fall.

You can see an excerpt of the Crowley interview here: