Microsoft used its pre-Mobile World Congress press conference last week to talk about how Windows Phone is closing the app gap with rival platforms — and hammered that point home bu also announcing that Facebook Messenger would be available within “weeks“.

True to its word, Redmond has today confirmed the Facebook messaging app is now finally available to users of Windows Phone — more than two years after it arrived on iOS and Android. 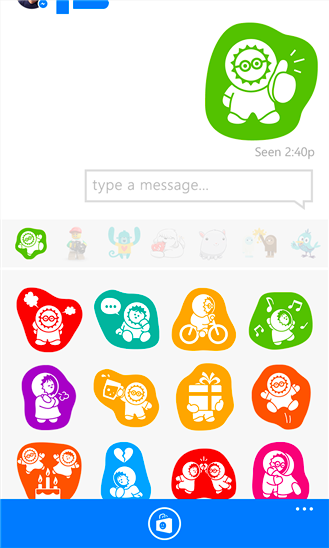 Whether it was worth Windows Phone users waiting so long for some perfectly flat cutesy stickers remains to be seen. (Especially as the feature list of the app is not yet as extensive as the Android/iOS version — with, for instance, no option to record voice messages or make voice calls as yet.)

Microsoft is slowly getting more big name apps to port to Windows Phone — finally snagging Instagram last fall, for instance, and name-checking the likes of Vine and Waze as other recent arrivals at its MWC presser last week.

However even as it’s closing the biggest app gaps, there’s no denying Windows Phone continues to experience an app lag — being last in the queue to get hot new apps.

That’s a reality of being the third mobile ecosystem that Microsoft — for all the money it throws at app developers — appears unable to influence.