Sharalike, a new application that lets you create video slideshows similar to Facebook’s recently popular “Lookback” videos, is now launching into beta. The company’s technology takes your own photos and videos and automatically sorts them into animated, HTML slideshows in just a matter of seconds. Users only have to point the app to the media they want to include, then pick a theme and the music.

The Boston-based company was founded in 2012 by serial entrepreneurs, Aymeric Vigneras and Etienne Leroy, who wanted to build a simple online solution for storing and managing large image collections, while also finding a new way to share this content. The average user today is overwhelmed by the huge number of images they create via their cameras and smartphones, explains Vigneras, plus the time it takes to manage all that content.

He says he was personally inspired to create Sharalike after taking a ton of pictures with friends while visiting Cape Cod. “I promised everyone to make a nice video montage and share it with them ‘tomorrow’. ‘Tomorrow’ never happened,” says Vigneras.

The product competes with other “slideshow” makers currently on the market, including the buzzy video app Flipagram, which was recently rumored to be raising $50 million-$60 million at a $300 million valuation. Others that arrived earlier, like Animoto, for instance, have since expanded to enterprise after failing to hit the sweet spot in terms of broad consumer adoption. That doesn’t mean the newer contenders will follow the same course, though – in this business, timing is everything. 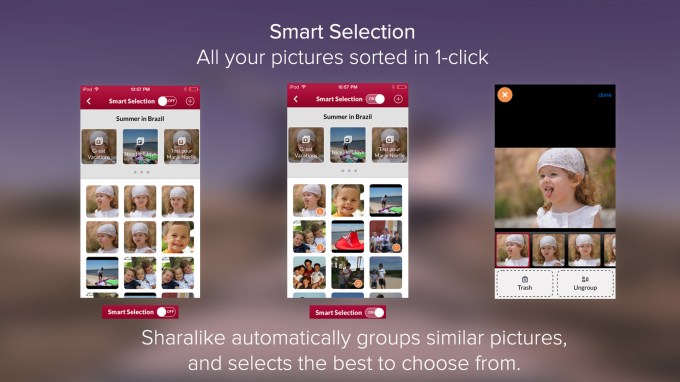 Like Flipagram, Sharalike takes your photos and sets them to music. But it works with videos, too. After you upload from your iOS Camera Roll, Photo Stream or other iOS album to an album within the mobile app, or from your hard drive if you want to use the desktop version of the service, Sharalike will automatically sort your pictures and select the best ones. That is, its technology can look for things like those photos where people have the best smiles, or those that are less blurry, for example.

The resulting creation is built in a few seconds, generally speaking, though if you’re mixing in your own videos, it can take a bit longer. You’re then able to select music and share your slideshow — or “SmartShow” as the company calls it — with others on social media, like Facebook or Twitter, via email, or by copying and pasting a link. (Here are a couple of examples.) 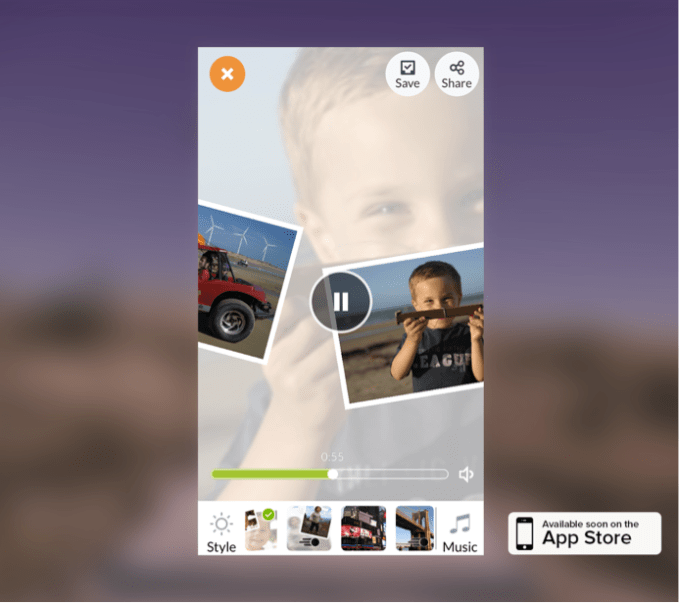 The current version on the App Store is the alpha, the company says, and this one still has some kinks to work out. For example, the initial sign-up flow is overly cumbersome, and I did experience some crashes and slowdowns during testing, mainly when uploading video. But the beta release, expected to arrive at any moment now (it’s pending Apple approval), will be more stable and offer a host of improvements, we understand.

From what I’ve been able to personally test so far, Flipagram is further ahead in terms of its user interface and overall experience. But Sharalike’s “automatic” capabilities are interesting – Flipagram, meanwhile, only offers to shuffle photos, or sort them oldest to newest or vice versa.

In addition to the iOS app, Sharalike will support Android, Windows and Mac users, too.

Vigneras says the service is targeted mainly at millennials, women ages 35+, and those in other industries where they may take a lot of photos (think weddings, travel, real estate, etc.). The plan is to make Sharalike a freemium business, where paid packages would be available starting at $4.

Headquartered in Boston, Sharalike is backed by $900K in angel funding, plus founder investment.