HTC posted its February revenue tally (unaudited), and the number looks weak. The company had NT$7.22 billion in top line during the month, or $238.1 million USD. That’s down 36.5 percent from the same month a year ago, and down 25.29 percent from January, the sequentially preceding quarter. 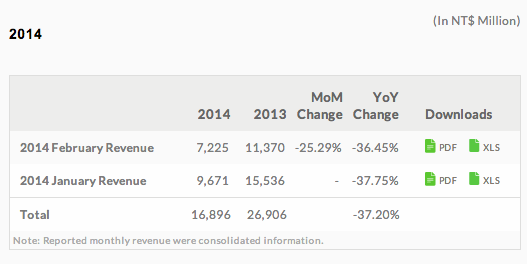 All told, HTC is down just over NT$10 billion so far this annum compared to the same interval last year, or around $330 million USD.

Naturally, if those figures were in tune with what investors expected, the declines would be less painful. However, it more so appears that HTC projected a low quarter and is going to fail even that modest test. This is made all the sharper by the fact that January and February of 2013 were also weak quarters, each posting top line decreases.

TechnoBuffalo’s Todd Haselton put it well this morning: “In its Q4 2013 earnings, HTC projected a poor outlook for the first quarter of this year, with a projected revenue of NT$34 billion and NT$36 billion. With only NT$16.89 billion on the books so far, that’s looking like a tough goal to hit.”

To hit those figures, HTC would need revenue in March of greater than both January and February combined. That doesn’t seem likely. In March of 2013 the company had revenue of NT$15,882. So, if unlike the past 28 sequential months, HTC manages to not post a YoY revenue decline, staying flat, it will still miss its Q1 targets.

Something else to keep in mind: HTC’s next Big Phone Release won’t land until March 25th. That’s likely too late to salvage the quarter.

How fallen the previously mighty.

IMAGE BY FLICKR USER Kārlis Dambrāns UNDER CC BY 2.0 LICENSE (IMAGE HAS BEEN CROPPED)