Originally, Finish was priced at $.99.

So how did the startup, with absolutely no marketing spend and no formal PR representation, pull in so many downloads out of nowhere?

It’s all about timing.

For one, Ryan Orbuch is a hound. He’s a smart kid who built a pretty app, and as a high schooler himself he truly understands his target demographic.

But he’s also one of the last people I want to receive a text, email, or DM from. Not because he isn’t nice, or because I don’t like Finish, or because he’s done anything wrong. In fact, he’s done most things right — the kid won an Apple Design Award at 17!

But he can’t be stopped.

Try as I might to ignore his updates on Finish, I can’t. He wears me down. When he can’t get in touch with me, he starts to wear down my team. 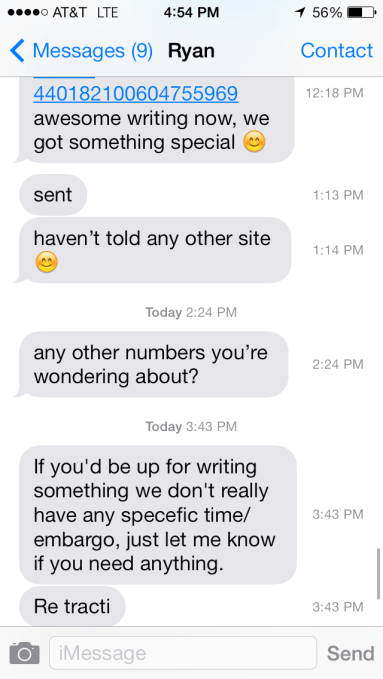 And the worst part is, he’s super sweet. You can’t even be mad at him for the incessant texts and emails. He’s just a young, smart guy who’s trying to make it in this crazy little place called Silicon Valley.

Unlike some founders who are doing their own PR, Ryan never, ever gets angry. Oftentimes when founders do their own outreach, they can come off a bit aggressive and over-excited. If they don’t hear back, maybe because they’re doing something that a billion people have done before or maybe because the email simply got lost, they are enraged. Their hounding is aggressive, and laced with resentment.

I’m not the only journalist who feels this way about good, ol’ Ryan Orbuch. I have friends from other publications who have mentioned him to me more than once, because he simply can’t stop, won’t stop.

But beyond sweet, innocent persistence, Orbuch has a strategy in place. Not only did he secure coverage from a number of blogs with an embargo time, but he matched that embargo time to a public appearance he was making at TEDxTeen conference.

Combining the in-person crowd and the online reach of coverage in various media, the app saw a huge uptake in users. Finish went from having around 50k paid downloads since its original launch a year ago, to having 50k free downloads in the span of a couple of days.

The real question is how many high school students will pay an extra $.99 to unlock premium features.

(Dear Ryan, please leave me alone until the iPad version of the app launches. Thanks!)