Under fresh leadership from new CEO Don Mattrick, Zynga has gone back to the drawing board on some of its biggest money-makers.

Today, the company is unveiling upcoming revamped versions of Zynga Poker and Words With Friends along with a brand-new mobile-first version of its biggest hit FarmVille. It’s a critical time for Zynga, which is trying to revive momentum after losing out on mobile platforms to younger rivals like Finland’s Supercell.

When the company went public in 2011, it commanded nine of the 10 top social games on the Facebook platform. But success on Facebook meant that the company didn’t invest enough in the emerging world of mobile gaming. So companies like Supercell basically built what could have been FarmVille for mobile in games like “Hay Day.”

Now Zynga is fighting back by overhauling its best-known and most lucrative games.

“We have top titles in casino, farming, words, racing, and people [through NaturalMotion’s Clumsy Ninja],” said COO Clive Downie. “Then there are another three to five distinct content categories that we’re already thinking about. If you have a #1 title in every one of those categories with a piece of evergreen entertainment, that’s scale from a business standpoint. Those categories are enough to power the top 20 games.”

Downie said that since he was recruited by Mattrick from Japan’s DeNA, they’ve flattened out Zynga’s organization by removing layers of middle management and by making gaming teams more agile. Zynga ended the year with 2,034 employees and annual revenues of $873.3 million, while Candy Crush Saga-maker King had $1.88 billion in revenue with 665 employees. Clash of Clans-maker Supercell had $892 million in revenue with 130 employees.

All of this continues to show how extreme the economics of gaming can be when you have a hit. Even though Zynga is struggling now, it’s entirely possible that it could make a comeback. Just look at the company’s rivals: King languished for several years in the late 2000s, while Zynga blossomed on Facebook. A couple of years later, they had switched places. Similarly, Supercell’s leadership came from Digital Chocolate, a long-troubled social and mobile gaming company from EA founder Trip Hawkins. Zynga’s shares have risen 88 percent in the last six months on hope that Mattrick might be able to turn the company around and on anticipation around King’s expected IPO.

Anyways, Zynga is re-imagining three of its best-known titles. These franchises are key: Zynga Poker, FarmVille 2 and FarmVille generated 21, 17, and 16 percent of the Zynga’s online game revenues last year, according to an SEC filing. 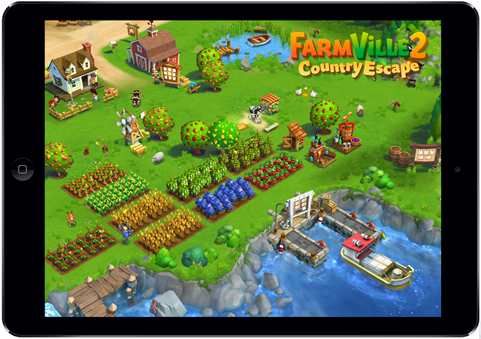 FarmVille is coming to mobile platforms as a standalone game for the first time ever. The company had released a companion mobile app a few years ago that let Facebook players water their crops from their phones, but it wasn’t fully-featured.

But now FarmVille 2: Country Escape will be a fully 3D game that can get to 60 frames-per-second on an iPad air. It has mobile-friendly gestures for watering crops and dragging wheat onto a windmill to make flour.

The game features a seaside farm plus other nearby virtual attractions like a winery, a mine and an airport. There’s a trading stand that serves as the games’ social hub so players can trade with their friends.

“Farming is this evergreen category that speaks to our human DNA to plant and grow crops and raise animals,” said Jonathan Knight, who is a vice president overseeing the game. 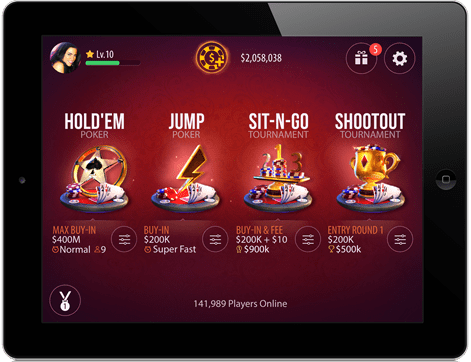 Then the company also re-vamped Poker, its top money-maker on mobile platforms for the last several years and the original title that made Zynga a company. The company cut out the red-headed female character and changed the color scheme to feature the kinds of rich reds and golds you might actually see in a real casino.

“It’s hard to imagine reinventing a game that is so old in general,” said Nick Giovanello, the creative director for Zynga Poker. “We looked to the real world and real casinos to see how they design their environments and how that affects player psychology.”

They made the profile photos of players more prominent and made manipulating the chips more of a tactile experience for the touchscreen. 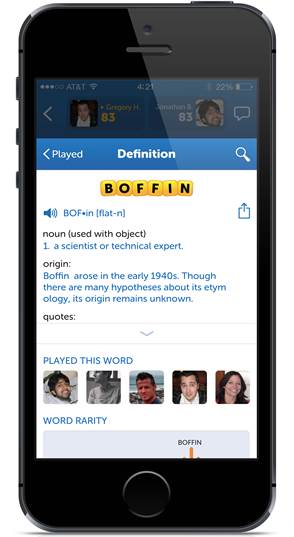 Lastly, they’re overhauling Words With Friends, the game Zynga acquired through the 2010 deal to buy Texas studio Newtoy for $53.3 million.

They’re adding long-requested features like a dictionary and vanity metrics on people’s profiles so they can see their best-scoring words and stats on their average word strength. They’ve also gone back to the original, more simplified model of having a paid version without ads and a free, advertising-supported tier.

“What we’ve found is that ‘simple’ wins on mobile,” said Abhinav Agrawal, who is vice president of Words With Friends. “It’s our core learning from the last few years.”