Microsoft’s Cortana virtual assistant is coming to its mobile devices in Windows Phone 8.1, and a new set of leaked screens from The Verge shows a bit of what you can expect from the Siri clone. Unsurprisingly, Microsoft decided against using a holographic female avatar (i.e., the Cortana from Halo) as the visual representation of the software, and instead stuck with a small animated circle.

Cortana’s settings reveal that the assistant can be set to suggest things to a user, which indicates that it’s more than just something that works when called upon like Siri, but in fact can offer up suggestions to you throughout the day while you’re doing other things. It can also glean information about a user from their email, allowing it to keep track of things like flight departure times and more. 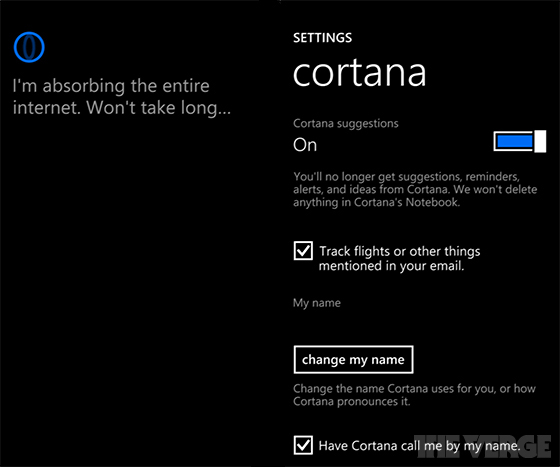 As mentioned in a previous leak, Cortana differentiates itself in part through transparency, offering up a so-called ‘Notebook’ in which it displays all the information the assistant has access to from your device and cloud services, and making it possible to select what is and what isn’t made available. The new screens also reveal that you can change how Cortana refers to you, by giving yourself a nickname if you prefer, and letting you disable it referencing you by name at all.

Cortana and Windows Phone 8.1 should arrive this spring. The virtual assistant brings Microsoft level with its competitors in terms of offering up some kind of intelligent digital companion service on its mobile devices, but we’ll have to wait and see whether it has the brains to become an actually useful feature for the everyday consumer.