Ask.fm, the personal Q&A site that’s been steeped in controversy over safety concerns for its predominantly teen user base, shows little sign of growth slowing. It’s now surpassed 100 million signups to its web and mobile apps — up from 65 million in June last year — and is adding between 180-200,000 new users per day, although that’s down from a peak last summer of 300,000 new daily registrations.

Of those 100 million-plus “users”, however, TechCrunch understands that only around 40 per cent were active last month, and 60 percent in the proceeding three months — though I’m told that’s an upward trend in general as users engage with the service longer. In other words, growth remains steady.

“I am not sure if any publicity affected our growth, positively or negatively,” says Ask.fm co-founder and CEO Ilja Terebin, when asked what effect the media backslash has had on growth after the site was linked to a raft of teen suicides.

Since that backlash — reminiscent of some of the reporting around MySpace in its heyday, in which Ask.fm has faced claims in the UK, Ireland and elsewhere that the site isn’t doing enough to protect young users, creating an environment rife with cyber bullying — the site has added new safety mechanisms, specifically upping the number of moderators.

The company also employed a PR agency who initially put Ask.fm on an effective PR lock-down, before announcing those new measures in a carefully crafted piece of PR crisis management. The company has also been taking part in what looks like background/off the record briefing.

Part of that PR campaign included a promise to publish an online Safety Centre on Ask.fm’s site to help users develop online safety skills and to act as “a place where parents, carers, teachers, and users themselves can search for information on how the site works, online safety tips, and the company’s strict terms and conditions.” Prior to this, the Latvian startup provided little information on its site. 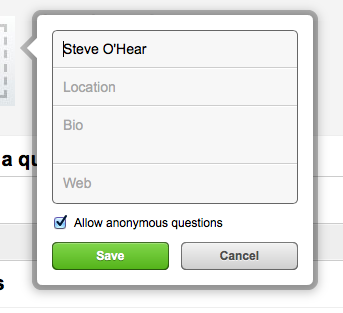 In addition, Ask.fm promised to make the option for opting out of receiving anonymous questions — the element deemed most likely to attract “trolling” — more prominent, something that it has now implemented. That said, I think the option could still be made clearer and, perhaps, should be off by default.

Regarding anonymity, the “Safety Centre” has this to say:

We think that anonymity gives young people the encouragement and confidence to ask the questions, have the conversations and find the answers to the challenges of growing up. It is one of our core values. It fosters honesty, transparency and self-worth. However, if a user is uncomfortable receiving anonymous questions, they can change their settings so that they will not receive any anonymous questions.

Returning to the topic of Ask.fm’s growth, it says its mobile apps have been downloaded 30 million times. Meanwhile unique monthly visitors to its site and apps are around 190 million each. The majority of users are from Russia, U.S, Brazil, Poland, Italy, Mexico, Turkey, France, Spain, Germany, Argentina and Saudi Arabia.

It was rumoured that the company was fundraising, something that Terebin says is untrue.