Building stuff does not make you a startup.

“But don’t we need to build stuff and iterate quickly?” I get asked a lot.

Well, sure. Once upon a time, when companies used the “old-school” waterfall model to develop products, pushing entrepreneurs to think in terms of building a minimum viable product as quickly as possible made sense. It substantially accelerated the development process. By narrowing the product scope to core features, you start the customer feedback loop quicker and you can more rapidly iterate based on that feedback.

But the pendulum has swung too far toward building stuff and away from spending some time getting to know your customer first. And the result is that more startups are building blindly, without focus, as well as falling victim to the “IKEA effect.” 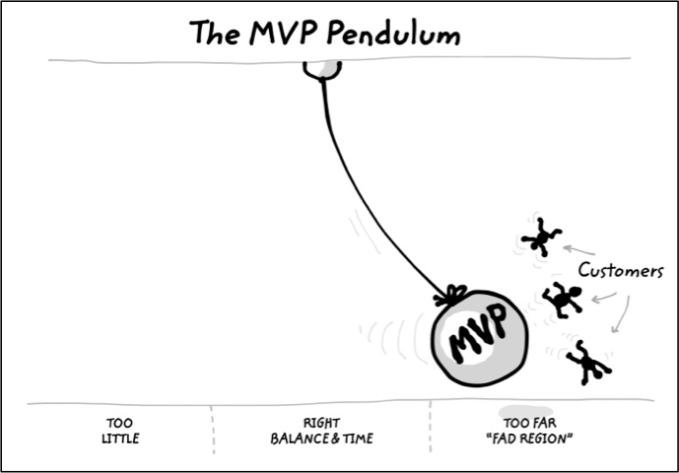 The IKEA effect, coined by Michael Norton, Daniel Mochon, and Dan Ariely, is that when you make something yourself, you value it way more than you should. The trio did tests showing that amateur origami makers valued their creations as equal to those made by experts – even though the expert-created pieces were objectively of a much higher quality. The phrase is named after the well-known Swedish furniture chain where “some assembly required” is an understatement. As a result, as soon as we build something, we all tend to move increasingly from inquiry mode to advocacy mode at the very time where the former is needed and the latter can blind us.

As soon as we build something, we all tend to move increasingly from inquiry mode to advocacy mode at the very time where the former is needed and the latter can blind us.

One of our recent alumni teams, who will remain nameless for reasons you’ll quickly see, is absolutely in love with the technology they have created. They have developed some impressive award-winning technology which has the promise to significantly improve the Human Computer Interface. They have built a demo that is in high demand, and each time someone expresses interest in a piece of their technology, they get excited and add some more to address the interested party’s desire. With their demo and impressive technological skills, they have gotten money from business plan competitions and investors, which I think is possibly the worst thing that could have happened to them.

Neither the “someone” watching their demo at a conference nor the business plan judges nor the investors are paying customers. What the team calls an “MVP” is simply a sexy proof of concept. They say they are testing hypotheses, but the hypotheses they are testing relate to technological feasibility. They claim they are “pivoting” – which means they have run out of business ideas but not money – on a regular basis. And as a result, they’re not making progress.

Why are they devoting all their time and money to building when, as a startup, they have precious few resources? Because they built it themselves, and they love it, and they’ll be darned if you tell them their MVP isn’t attracting any paying customers and that they should instead focus on an honest dialogue about customer needs. They are too beholden to the IKEA effect. They claim to be in inquiry mode but really are much more in advocacy mode for what they have developed.

Compare this to another recent alumni team, FINsix. The company won recognition and a slew of awards last month at CES for its product, a miniature laptop power adapter that is a quarter the size of today’s power bricks.

But when they first showed up in my class, they only had a promising technology from the labs. I’m sure that power supply geeks will be impressed by Very High Frequency (VHF) switching that is 1000x faster and with a 10x reduction in converter size. “The elimination of heavy components, like magnetic core transformers, enables superior resistance to mechanical shock and vibration,” according to their website, which sounds like a good thing, too.

However, none of that helps a well-defined group of customers address a pain that they’re willing to pay money to address. FINsix recognized that, and so rather than build, build, build, they took some time to learn about customer needs.

“We were able to test the [VHF switching] concept with many different markets using an electronic brochure and extensive surveying to determine our beachhead market of laptop power suppliers,” co-founder and CEO Vanessa Green told me. A brochure.

There is a lot less emotional investment in an electronic brochure than an MVP that the engineers build. And their analysis allowed them to consider a range of markets, from cell phones to LED lighting, before determining that laptop power adapters were the best way to gain a core group of paying customers that would sustain the company so that it can develop more products.

You can’t develop the right product for your customer if you fall in love with a prototype that nobody wants to buy.

Had they fallen in love with their technology, or the first prototype they built, they may never have gotten to the point of selling a consumer laptop charger. Think that app makers are immune to the dangers of an MVP? Sure, an app has less initial investment required, but otherwise, a business is a business. It’s easier to spin the roulette wheel when you don’t need as much upfront or sustaining capital, but that doesn’t mean you have a solid startup.

You can’t build great products in the dark, without a well-defined customer. And you can’t develop the right product for your customer if you fall in love with a prototype that nobody wants to buy.

So unless your end game is hoping that before the money runs out a competitor will buy you for your engineers or technology, you need to stop obsessively building, and start an honest dialogue with potential customers about their needs. It may not be as fun as tinkering with a “product,” but it is far less stressful than playing the acquisition lottery. That is what we call “disciplined entrepreneurship” where you can have both great technology and great marketing, leading to epic products. It is a false dichotomy to think you can only have great technology or great marketing, as some commenters have recently claimed in a myopic comparison of Stanford and MIT graduates.

Think I’m a conservative East Coast entrepreneurship instructor who’s behind the times? Last week when I was in San Francisco and chatted with David Bergeron of T3 Advisors and Cory Sistrunk and Ed Hall of Rapt Studio, they were right on the same page. “The MVP mentality has unintentionally taken us away from ‘user-centered design’ and a focus on the customer,” they told me. “We have to focus on the WHY before we can focus on the HOW and WHAT.”

For the entrepreneur, stop obsessing about your MVP.  Your first question, before HOW and WHAT, has to be “FOR WHOM?”