Here is a small but nifty update to Google Search: if you ask it to find a restaurant menu for you, it will now often just show you the menu right on the search results page. Try this for a search like “show me the menu for fogo de chao” and the menu will be right there. 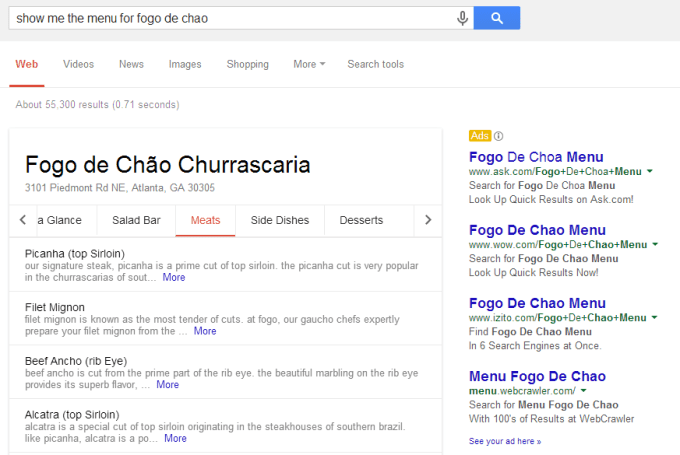 As far as I can see, this doesn’t work for every restaurant yet and it’s unclear where Google is getting this data from. Right now, the number of supported restaurants also seems to be limited. Most of my attempts to trigger the menu listings were actually unsuccessful, so your mileage may vary. The searches that did work tended to be for restaurants that are also listed on AllMenus.com, so chances are this is where Google is getting its data from.

This feature was first spotted earlier by Search Engine Land earlier this month, which also suspects AllMenus.com as the source for the data. At the time, Google said it was just one of its many tests. Today, however, it made it official with a post on its Google+ page.

Given that restaurant websites are often quite antiquated (and many still have an annoying Flash intro), having the information you need right on the search results page is pretty cool (when it works). I don’t know how sites that specialize in showing you restaurant menus feel about this addition, but once Google adds more restaurants, I’m pretty sure I’ll use this feature pretty regularly.