Salesforce reported its fourth quarter and full fiscal-year 2014 financial performance today. In the fourth quarter, the company had revenue of $1.15 billion, up 37 percent year-over-year. On an adjusted (non-GAAP) basis, Salesforce earned $0.07 per share.

Analysts had expected $0.06 in adjusted earnings per share and revenue of $1.1 billion in revenue.

On a GAAP basis, Salesforce lost $0.19 per share in the quarter. For the full year, Salesforce had top line of $4.07 billion.

Importantly, Salesforce raised its fiscal 2015 revenue guidance to between $5.25 billion and $5.30 billion. On the low end of that measuring stick, Salesforce would grow its revenue by under 30 percent during the year, indicating percentage growth deceleration.

Despite beating expectations for the quarter and raising its guidance for the current year, Salesforce is down a fraction in after-hours trading. This could be due to the fact that analysts had already anticipated that Salesforce would have revenue of $5.2 billion in 2015, making the news that guidance was being skewed higher only matching expectations; you rarely get rewarded for that on Wall Street. 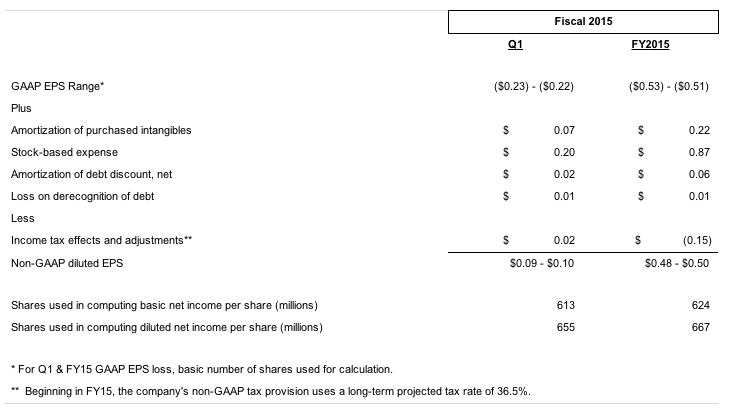 The company also announced that its long-time CFO, Graham Smith, will retire at the end of the company’s fiscal first quarter of 2015 (March).