Google has become an increasingly active participant in the world of education, particularly when it comes to exploring the role technology can play in re-imagining the way we learn. With Google Play for Education, Android and Play-powered Samsung tablets for the classroom and its work with MOOCs and online courseware, the company is expanding its presence both in traditional academic spaces classroom and outside.

Google’s educational experiments continued today, beginning with the launch of its first MOOC-style course, now open to the public, on how to interpret and understand online data. The second experiment, quietly announced on Google’s Open Source Blog, was the launch of Oppia, a project that aims “to make it easy for anyone to create online interactive activities” that others can learn from.

The motivation behind Oppia, Google explained in its announcement, stems from the fact that, while a growing amount of educational content is now delivered via video and SMS, much of it remains static and asynchronous. Or, said another way, digitizing a lecture or presentation isn’t enough; there is still plenty of room for improvement when it comes to the way these tools create opportunities for interactivity, dialogue and feedback.

Google’s new open source project essentially aims to take the headache or mystery out of the process by providing the framework by which anyone can quickly create these types of interactive learning experiences and add them to their site. But, beyond that, Oppia also has potentially interesting implications for teachers, and not necessarily in a way that reduces their concern of one day being replaced by a robotic or holographic, AI version of themselves.

In other words, Oppia works to improve the interactivity of the learning process by assuming the role of a mentor or teacher who asks questions of the learner. Then, based on how the learner responds to those questions, the teacher decides how to proceed, which questions to ask, how to give feedback and so on. In describing Oppia, Google says that one can think of it as a “smart feedback system,” which is an attempt to begin automating how we “teach a person to fish” — to use its example. 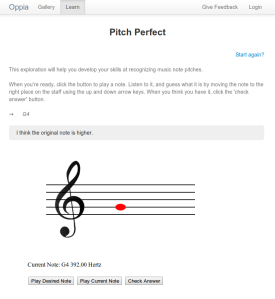 The system gathers data on the ways learners interact with whoever is guiding the exploration, and the content they provide, and shares it with authors to make it easy for them to fix problems with their lesson. Authors might log in to Oppia to find an answer that learners are providing to a question but which the system isn’t correctly or adequately responding to, for example.

The “teachers” can then “create a new learning path” for the question, basing their feedback on how they would respond to the question were they actually interacting with the person in real life. Oppia then provides the feedback to any future learner responding to the question. The project also allows teachers to accept responses to their lessons in numeric, text and multiple choice formats, and offer clickable maps and code evaluators, for example.

On the technical side, Google says that it’s based Oppia on an extensible framework, allowing developers to add their own inputs and extend the range of potential formats and types of responses that Oppia understands. Explorations, as Google calls the lessons users can build through its system, that are created on an Oppia server can be embedded in any web page, and embeddings can “refer to a particular version” of the exploration so that future changes don’t mess with the principle version, the company explained.

In addition, users can also collaborate on creation and editing of explorations, with version control, and the system allows parameters to be associated with a learner, which aim to enable teachers to create deeper interactive experiences. Oh, and Oppia has a built in responsive UI for mobile devices, as well, as The Next Web points out.

As with many Google projects of this kind, it’s not totally clear how much attention and support Google intends to throw at Oppia going forward. The project’s home page conspicuously says that Oppia is not officially a Google product, which would seem to imply that Google isn’t planning to dedicate a ton of manpower or resources to the project. Instead, the company is likely hoping that developers will assume ownership of Oppia and that the community will take over maintenance.

Nonetheless, it’s still a neat tool and it should be interesting to see what becomes of Oppia in the coming months. While it is, of course, intended to be a learning tool, Oppia could potentially be applied across in a wide range of use cases, enabling a sort of expanded, extensible FAQ or feedback system for products, companies, teachers and more.

More on Oppia at home here and in Google’s YouTube explainer below: