Connect, a new location-based address book and friend-finder utility launching today for both web and iPhone, will tell you who’s nearby, allowing for more “serendipitous” encounters. If that idea sounds vaguely familiar, it’s because a crop of location-based social apps, including Highlight, Banjo, Glassmap and others, caught the tech world’s attention around the time of Austin’s SXSW conference back in 2012. But Connect is taking a different angle: Instead of tracking users via GPS, which co-founder Ryan Allis says can be a bit “creepy,” the app aggregates data from social networks to show you friends’ locations in real-time.

More importantly, perhaps, is that Connect can serve a larger purpose beyond just telling you who’s nearby – it’s a fairly smart address book, too, as the app lets you search for contacts by a number of fields, including not only their name, but also their company, job title, school, interests, relationship status, gender, city, and more. 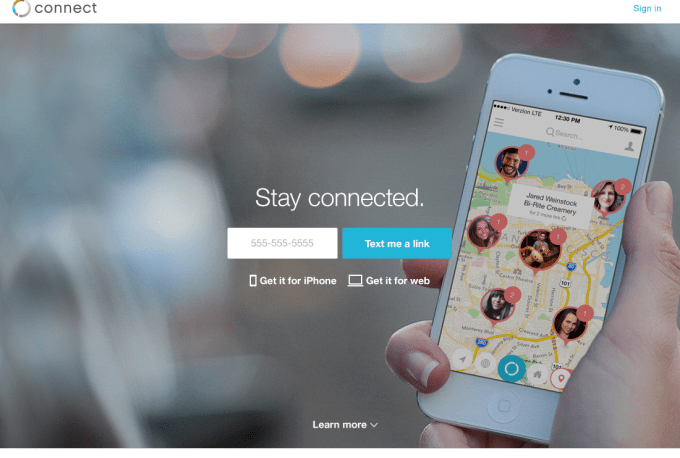 To get started with Connect, users are asked to add their iOS address book (on mobile), plus their Facebook account, as well as their Google address book and other social networks like LinkedIn, Instagram, Foursquare, and Twitter, for example. After doing so, the app will display your nearby connections on a map, based on their check-ins (as on Facebook or Foursquare), or their geo-tagged posts (like with Twitter or Instagram). The map view can be toggled between an “All” view (all recent check-ins) and a “Now” view, to show only those that have just taken place.

To access the smart address book section, however, you have to tap the small “person” icon at the top right of the main screen, then tap into the search box to display the filtering options. Though this feature is not as key to Connect’s larger mission of connecting nearby users, it’s arguably the more practical one for those no longer enamored with location-based check-in services.

A variety of settings lets you configure and control how Connect will alert you to nearby friends, which gives you some flexibility in how you choose to use this application. For example, you could just turn on a setting that pings you when out-of-town friends are in your area, when friends are traveling, when they’re nearby, and more. You can even drag a slider to designate how many miles from the center of town your “nearby” alerts should be, or designate certain contacts as favorites to limit your alerts.

This makes Connect a powerful utility in terms of how finely it can be adjusted to meet your specific needs, but it also could make it difficult for users to easily understand what Connect does because it offers so many different use cases, ranging from professional networking to dating possibilities and everything in between.

My personal interest in the app is contact search and filtering, not really the real-time location-based element. That latter item is something I could use in spurts, like at a conference or while traveling out-of-town. But while it will surely be handy then, that’s a more limited use case since I’m not typically trying to “bump” into people for chance encounters while out running errands (though your mileage may vary).

It’s also worth noting that many of the apps pitching similar “serendipitous” connections during SXSW 2012 later fizzled; after the event wrapped, many realized there’s only so much “real-time networking” one needs to do every day. (Well, that, and some tended to be battery hogs by using your GPS too heavily. Oh and we have Tinder and Grindr for hookups now, so we’re, um, good there.)

But the smart address book element is something that could potentially see Connect competing with other utilities like Brewster, recently acquired Cobook, or even LinkedIn’s own Contacts app which lets you aggregate your connections from a variety of sources, too. 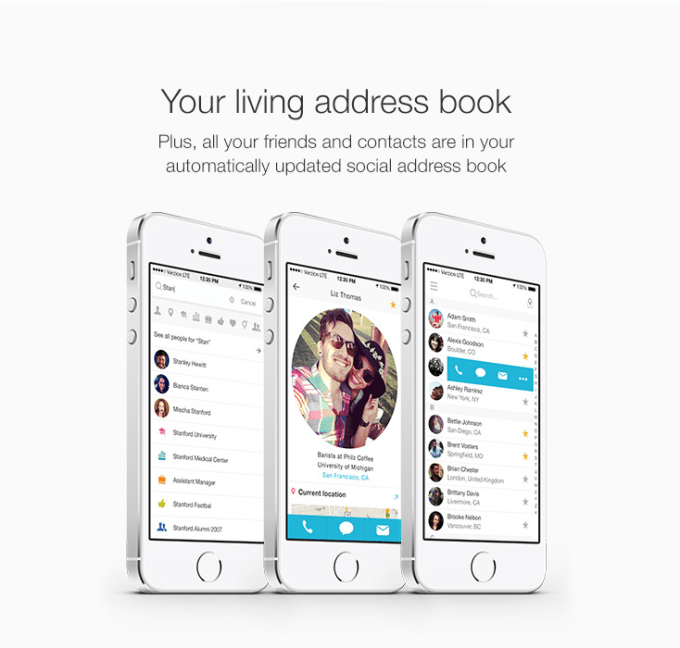 Connect has been in development for the past 18 months, and ran a beta during the fall with some 16,000 testers, who encouraged the company to add a cross-platform check-in feature – another blast from the past, reminiscent of old services like Check.in or Footfeed. (Connect’s twist? You can include a duration.)

In addition to co-founder Ryan Allis, who previously sold his emailing marketing service, iContact to Vocus for $170 million, the founding team includes Anima Sarah LaVoy, an Oxford MBA whose interest in people tracking has roots in her passion for political organizing; Zach Melamed, previously of LaunchRock; and Lilia Tamm, previously of the Singularity University.

Explains LaVoy, she had the idea for something like Connect before she met Ryan. “I had contacts from four or five different fields and interests,” citing those she knew from university, her city, from her political work, and more. “I realized these relationships were the most important thing I had to keep track of…and I didn’t have any way to do that,” she says. With Connect, she says that now changes.

Adds Allis, the app isn’t limited to just your contacts, or those you know on LinkedIn – it has a broader reach. “Other apps, like Foursquare or Highlight, have the ’empty room’ problem,” he says. That is, they’re not as valuable until a large number of your friends get on board. Connect, at launch, is able to find all your friends, provided they’re using some sort of social network.

And, if your friends aren’t as active socially, it could still make for a handy address book.

The eight-person San Francisco-based company is self-funded with a $2.5 million personal investment, thanks to the sale of iContact. Interested users can sign up here, or grab the app from iTunes. An Android version will arrive later this spring.