The App Store is a strange and whimsical bedfellow. It is a kingmaker, but with that comes the tears of the anointed, the displaced and the never-rans.

As an example of the store’s fickle nature, Flappy Bird held the Free App pole position for so long that it could not handle the success, committing seppuku. Almost immediately three clones popped up to replace it, including “Flying Cyrus”, a Miley Cyrus-themed clone.

It’s easy to attribute the exodus to a specific mistrust of Facebook, whose own mobile apps are not particularly favored and weigh in below Telegram, WhatsApp and even Snapchat in the App Store’s score chart. But it could also be a mistrust of large tech platforms in general, the result of Edward Snowden’s revelations that big companies like Apple and Facebook cooperated with the NSA’s tracking of user data.

Telegram, created by Pavel Durov, founder of Russian Facebook competitor VKontakte, wants to be the safest — and most NSA-proof — messaging app in the world. Before the WhatsApp bomb dropped last week, the service was growing by 300,000 – 400,000 downloads per day, Durov tells me.

Durov says that after the news, the app’s growth rate increased around 3x to 800,000 – 1 million new downloads a day across iOS, Android and Windows. On the day of WhatsApp’s downtime, it added 1.8 million users. Yesterday it added 4.9 million, and propelled itself to its current No. 4 slot in iOS right behind three, yes three, Flappy Bird-inspired apps. 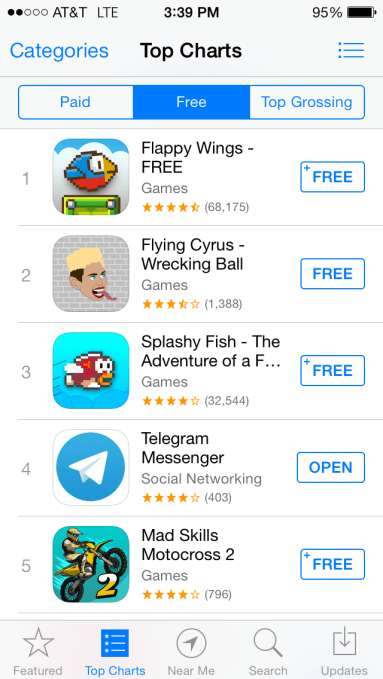 “The No. 1 reason for me to support and help launch Telegram was to build a means of communication that can’t be accessed by the Russian security agencies, so I can talk about it for hours,” Durov tells me, adding that he stands by the app’s claim that its encryption is the most superior available, despite Hacker News threads to the contrary.

Like Secret, which also hinges on user trust, the bootstrapped product has a $200K bounty out for those who can hack it. “No one won so far, but a guy from Russia found a serious issue in December and received $100,000 from me,” Durov says.

The coolest thing about Telegram is that it combines elements of Snapchat and WhatsApp, allowing you to set a timer to “Secret” (extra encrypted) chats. To start a Secret chat, click on a user’s avatar and select “Secret Chat.” To set the self-destruct timer on the chat, click on their avatar again, and set the expiration time to anywhere from two seconds to one week. Then sit back and watch your chats automagically evaporate.

The second coolest thing about Telegram is that the founder seems extremely non-plussed with the app’s newfound success. When asked how he would beat all three Flappy Bird clones to the top spot, he jokingly replied, “I don’t like the idea of beating birds. I’m vegetarian.”