For the first time in its history, Berkeley saw an introductory computer science course with predominantly female students – 106 women vs. 104 men. This slight turnaround signals a promising trend in the male-dominated STEM world.

To be sure, Berkeley is an exception: according to the National Science Foundation, just 18.4% of computer science degrees were given to women (as of 2010), a trend that has been steadily decreasing since 1991, when it was a more impressive 29.6%.

In an email, Professor Dan Garcia, who taught the Berkeley course last spring, tells us that he attributes the gender flip to a drastic transformation in the curriculum, including team-based project learning, opened-sourced materials, and opportunities to become teaching assistants. “The course & curriculum really does capture the “Beauty and Joy” of computing; learning can be a lot of fun,” he writes.

There is still a long way to go. Worldwide trends in the gender balance aren’t any better than the U.S. Recent data from UK universities, shows that while women do earn a majority of the degrees (60% vs. 40%), they vastly underperform their male counterparts in computer science (82% vs. 17%). 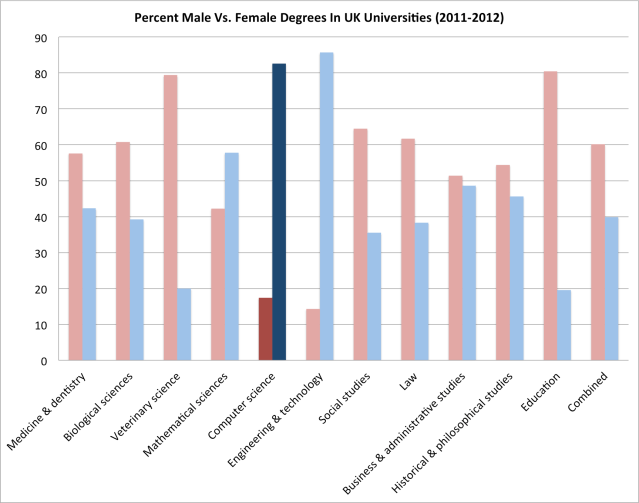 The gap has its origins going back at least as early as high school. Statistics, biology, and calculus courses all have roughly equal gender balance, but in computer science, the pie chart skews heavily male. (chart by Exploring Computer Science, with data from the College Board). 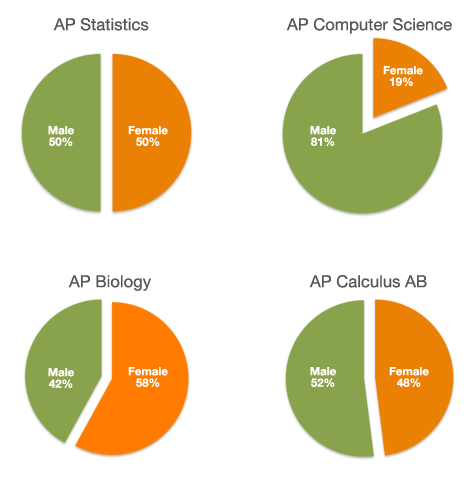 Garcia says there are still barriers to keeping women interested throughout their entire tenure, such as “the lack of female role models in our industry, in our faculty, and in the graduate student population.” Even if they go on to advanced courses, there’s no guarantee they’ll get a job in the cut-throat tech industry.

As one of the important feeder schools to Silicon Valley’s top companies, Berkeley is not a passive player. If it can succeed in dramatically increasing female enrollment, it could set a chain reaction that breaks down norms for future generations to come.

Image by Flickr user brainchildvn under a CC by 2.0 license