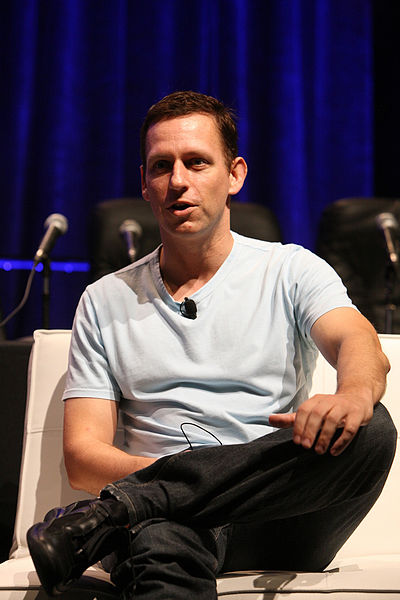 Early Facebook investor and noted Silicon Valley libertarian Peter Thiel thinks that too many Americans have mistakenly blamed technology for rising inequality. “Technology is an easy scapegoat,” he argued, in a big-think discussion put on by political lobby, FWD.us.

In a wide-ranging discussion with MIT professor Andrew McAfee, the two duked it out about technology’s role in social ills. “I think technology has helped,” Thiel said. “You have things like Facebook, like Google–technology has helped to offset some of the brutal effects of globalization”.

While globalization has flooded the low-skilled job market with ultra-cheap outsourced labor, technology has relieved the beleaguered middle-class with services in health, education and leisure that were once the exclusive domain of the wealthy, Thiel asserts.

Indeed, he partly blamed the failure to recognize the contributions of technology on an American mindset that is “anti-technology.” For instance, he notes, there was no financial industry-like bailout of Silicon Valley during the first dot-com bubble. He also notes that the nation’s general animosity toward tech can also be seen in the movie industry, which inundates the masses with tech super villains from “The Matrix,” “Avatar,” and” The Terminator” in a period of high tech hostility (compared to more tech-friendly movies, such as “Star Trek” in the ’60s and “Back To the Future” in the 80s, which is when he thinks the U.S. was less anti-tech).

As a self-avowed libertarian, Thiel wasn’t thrilled about the government bail-out of the financial industry. But he shocked the crowed when he openly supported more taxes in exchange for less regulation.

“I wouldn’t mind paying more in taxes if I could do anything I wanted to do with the rest of the money, which I’m largely restricted in what I can do, from the FDA on down to the San Francisco zoning department.”

San Francisco has an infamously restrictive policy on new housing developments, which has contributed to sky-high rents and evictions. Thiel’s comments were a transparent nod to the protests in front of Google’s private commuter buses, which have become a convenient symbol of the wealthy high-tech workers who have the free cash to cause upward demand pressure on San Francisco rents.

In other words, while protestors blame technology, Thiel hints at other causes — namely government.

For McAfee’s role in the discussion, he towed the traditional economist line on technology and financial disparity. “The observed rise in inequality across both developed and developing countries over the past two decades is largely attributable to the impact of technological change,” wrote a team of economists for International Monetary Fund–a sentiment widely shared in the academic community.

According to the economists, as technology automates jobs, it concentrates labor in a small slice of high-skilled workers.

Thiel rebutted this line of evidence by arguing that computers are complementary to people: they augment workers; they don’t replace them. “LinkedIn does not replace job recruiters,” he said.

Though he does admit that once computers begin to replicate humans (i.e. robots), he begins to get “scared” for the future job market.

Overall, it was a very thoughtful discussion; it was nice to see politically powerful techies lay out their contentious views on inequality for the public.

As soon as the video of the full discussion is available from FWD, we’ll embed it here.