Thanks to Facebook’s $19 billion WhatsApp acquisition yesterday, the tech industry is going to be on the lookout for the next great mobile messaging app. With fortuitous timing, a new mobile video messaging app called Samba is debuting today – and, no, they didn’t move up the launch to take advantage of the buzz, the plan has been in the works for weeks.

The app, which is very well-designed for a first release, lets you record a video for a friend, then record their reaction to that video, which is shared back with you. The idea, the company explains, is to offer the convenience of asynchronous communication, with the power of face-to-face communication.

It can also just be for fun, of course.

Based in Tel Aviv, Samba is led by co-founders Barak Hachamov (CEO), who longtime TechCrunch readers may know as the serial entrepreneur behind a number of companies, including most recently my6sense, plus Shay Erlichmen (CTO), Ronel Mor (Chief Creative), and Oren Meiri (Head of Client).

Hachamov told me last week during a demo that one of his goals with the new company is prove that beautifully designed services can come out of Israel. On that note, Samba succeeds. To get the full experience, you really have to play with Samba for yourself, but the basic premise is that it offers a simple tool to record, share, and save video messages and their associated replies.

What’s clever is the look-and-feel of Samba. When you’re watching a video, you can see your friend’s reaction to the video you sent them. Their video appears in a smaller, round window layered on top of your own. It looks like those “Chat Heads” that Facebook introduced with Messenger, for example. And like Facebook’s “Chat Heads,” you can drag that circle around on your screen with your finger.

But keep in mind, the reaction is not a still image – it’s actually a video that plays at the same time as the one you’re viewing so you can see their reaction synced in time to whatever it is you’ve sent them.

You can also tap on their reaction to switch audio channels or expand it for a better view. Gestures like a forward and backward swipe on the main video let you quickly rewind and fast forward, while a handful of simple buttons in the main interface direct to you to the various areas of the app, like the friend list or inbox, for example. 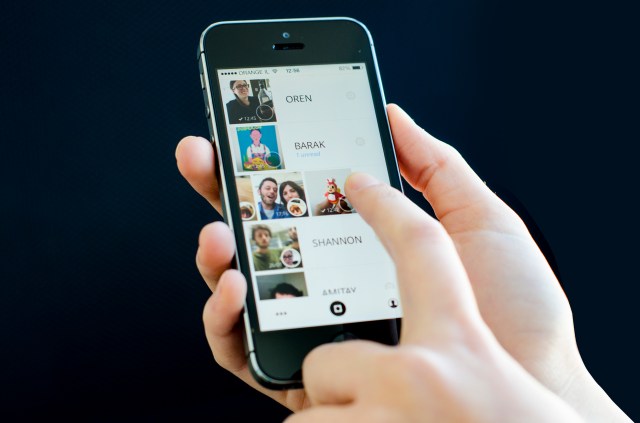 In your video inbox, all the videos sent to and from a single contact are displayed in a horizontal, swipeable interface next to friends’ names. More importantly, in this age of privacy and “ephemeral” messaging, you’re in control of the content you’ve recorded and shared. That is, after your friend has viewed your reaction, you can delete that video from the app on both your phone and theirs. (You just can’t delete the video they themselves recorded, of course).

Though there are many other video messaging and video sharing apps on the market today, Hachamov believes that Samba can carve out a niche for itself that’s somewhere on the same spectrum where Vine, Instagram and Snapchat live. Vine is for being creative, he says, while Instagram is for being expressive, and users on Snapchat still send mostly photos. 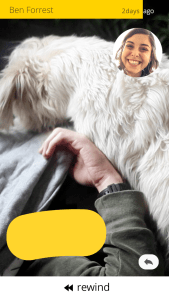 Samba, meanwhile, is about “addressing a sentiment in general,” explains Hachamov. These sentiments could be anything from pranking or surprising friends to letting a remote relative watch as a child take their first steps, and getting to see their reaction in return.

“We are all about the response and the feedback. It’s how we position ourselves. Some things are not deserving of more than an expression – in that case with competitors, you’d send back a smiley,” Hachamov says. “If this smiley is replaced by a video of a smile, it’s like emoticons on steroids,” he adds.

That being said, Samba does enter a crowded market where there are already several ways to record and share videos with friends or family, though maybe not in the same way, or not as privately. But mobile messaging and social media in general is not a winner-take-all market, which means that companies like Samba could carve out a space for themselves, if they can nail a particular experience.

The app, which competes with things like Dumbstruck or Gigglemail, is available for download here on iTunes. An Android version is in the works.