For some fashionistas wearables can be clunky and don’t aesthetically combine well with the other jewelry that women and men may have on their wrists such as bracelets, or a watch. Cuff is hoping to change this with a new line of jewelry wearables that serves as an alert system for family and friends.

The Cuff collection consists of bracelets, necklaces, and key chains in a variety of finishes and textures. The line is meant to be unisex, and offers options for both men and women. Each piece is anchored by a small rectangular component called the “CuffLinc,” which acts as the alert system. CuffLincs can be removed and tucked into any of the pieces in the Cuff collection.

Using Bluetooth technology, the CuffLinc will connect to your phone via Cuff’s app. If A wearer squeezes the Cuff, an alert will go to the designated people in the wearer’s network. If anyone in the network is wearing a Cuff, their Cuff will vibrate. If they don’t have a Cuff, they will receive a push notification to their phone with the alert with the location of the sender. You can set up which of your contacts will get an alert via the startup’s app, which also holds personal and medical information like blood type, health issues and more. Users can also program their Cuffs with different alerts for people (i.e. three taps to alert my babysitter, one tap for my husband). 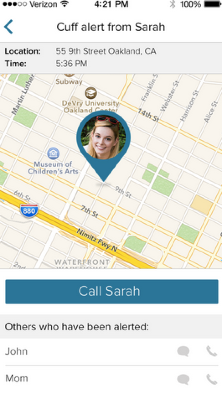 We’re told the CuffLinc doesn’t need to be charged and has to be replaced once a year. Cuff also plans to license CuffLinc to other fashion retailers and designers so they can potentially build around the technology.

Cuff is the brainchild of Deepa Sood, who was previously a former VP of Product Development at luxury retailer Restoration Hardware. Sood has been making her own jewelry for a while, and realized that there was very little wearable technology on the market that actually looks like jewelry.

The startup, which has raised a round of seed funding from Tandem, is launching pre-orders today with a number of options, including leather bracelets, metal bracelets, pendants and chains. These range in price from $35 to $125. Pieces will be shipped as early as this fall.

The safety and security notification capability is just one of the first smart functions that will be delivered through CuffLinc, explains Sood. Eventually you’ll be able to record your voice.

Of course, at this stage the CuffLinc doesn’t yet have the fitness and sleep-tracking capabilities of most wearables on the market. But Cuff has tapped into the aesthetic part of wearable technology that some feel is missing from trackers. Another startup that is doing something similar to Cuff is Sense6. And wearable developers are catching on to aesthetics. Misfit Shine offers a number different colors and leather bands. And Fitbit and Tory Burch have teamed up to create a new line of fashion-forward wearables.