In their first annual global mobile data report, analytics firm Mixpanel reveals that Android is the originating platform for the lion’s share of app data generated from the top 15 countries as measured by active mobile usage. 64 percent of all the mobile data from the top 15 data generators came from Android devices, and only three of the top 15 have a primarily iOS-using population.

The top data producers are Spanish-speaking countries, Mixpanel found, and in countries with Spanish as their native tongue, Android is even more strongly represented, accounting for 74 percent of all data generated by apps. France, Japan and The Netherlands are the only three countries on the list where iOS has a clear majority, and only one country (Thailand) shows a pretty much even split between the two platforms. 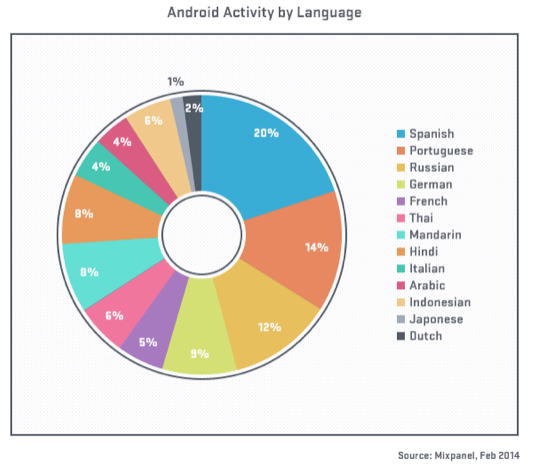 App data usage obviously isn’t the only way to measure platform and app engagement, but it does provide an indication that users are opening and using the software on their smartphones to communicate with the web. There are some valuable takeaways in this data for mobile devs, too: Specifically, it paints a picture of a mobile app market where Spanish localized titles have the potential to gain a lot of traction in terms of usage.

Another measure of app traction, and one potentially closer to developer hearts, is mobile revenue. App revenue in Asia grew a whopping 162 percent, according to Distimo, with much of that growth driven by Android. Primarily Spanish-speaking countries don’t yet appear on Distimo’s Top 10 countries as listed by app revenue, however. So while Android may be exploding in those emerging markets in terms of usage, that isn’t necessarily leading to big monetary gains for developers targeting those regions just yet.