Little Bird, the startup led by former tech writer Marshall Kirkpatrick, is announcing that it has raised $1.7 million in new funding.

Kirkpatrick, formerly an editor at ReadWriteWeb (now ReadWrite) and before that a writer at TechCrunch, launched the company in October 2012. He told me then that his goal was to help companies find people who are influential on any topic, based on an analysis of who follows them on Twitter.

Since then, Little Bird has changed in couple of key ways, he said. First, the service isn’t just limited to Twitter. It now includes Facebook, LinkedIn, YouTube, and Google+. Second, it has been adding tools that don’t just help companies find influencers but “make influencer identification valuable” — not just identify influencers but interact with them too.

Kirkpatrick contrasted Little Bird with Klout — the main way Klout connects brands and social media influencers is through the discounts and deals of its Perks program, which Kirkpatrick suggested is “a crass, shallow way to engage people.” Little Bird, on the other hand, is supposed to give companies more substantive ways to talk to influencers, particularly when it comes to business (rather than consumer) products and services.

The broader trend, he added, is that “the line between sales and marketing is increasingly being blurred.” In other words, salespeople are no longer “the guardians of information about a company,” so they need to find other ways to stand out: “You need smart things to talk about.” 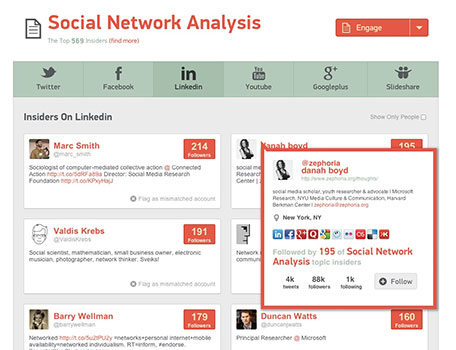 Kirkpatrick said he’d only intended to raise a $500,000 bridge round, but ended up raising more money based on the interest that the product has received from sales organizations, content marketers, and large enterprises. Nonetheless, he called the new funding a “Series Seed” intended to help the company grow and eventually raise a larger Series A.

The company is also announcing that it’s starting to fill out its executive team with the hire of CTO Michael Jones (formerly of the Dachis Group) and COO Ben Kaufman (previously of Monsoon Commerce).