Cash-based payments platform PayNearMe, which allows consumers to pay their rent, utility bills and loans, buy tickets online and more, is today expanding its footprint significantly in the U.S., thanks to a partnership with Family Dollar. The deal will allow consumers to use the service in the over 8,000 Family Dollar stores in 40 states, which brings PayNearMe’s total number of payment locations to 17,000, including their previous deals with 7-Eleven and ACE Cash Express.

Additionally, the company has raised $20 million in new investment, led by GSV Capital. Also participating in the round were previous investors, August Capital, Maveron, True Ventures, and Khosla Ventures.

Founded in 2009, and know as “Kwedit” up until its name change in fall 2010, PayNearMe is focused on serving the quarter of the country who prefers to or needs to pay with cash.

“Nobody has really innovated on their behalf in 20 or 30 years,” explains Danny Shader. “We’ve come along and made these transactions faster and cheaper,” he says, “but the biggest limitation we had was footprint.” Through 7-Eleven and ACE Cash Express, PayNearMe had a good reach, but not a great one. Now, that changes – especially because Family Dollar stores tend to be located in areas where 7-Eleven is not.

To date, the company works with thousands of business customers, including directly with those who do their own billing as well as larger entities that service the industries PayNearMe has been targeting.

For example, the company partnered with property management software maker AppFolio in 2012 to allow consumers to pay their rent using cash at nearby stores, but it also works with Greyhound, to help consumers buy tickets online with cash. Other customers include H&R Block, Herbalife, governments (local and state, so far, for things like child support or parking tickets), Shaw Systems (used by auto lenders), plus Kubra and FIS (electronic payments).

While Shader declines to discuss PayNearMe’s revenue, he would say that payment volume tripled between 2012 and 2013, largely coming from its rent business, as well as from municipalities, and transportation. To put the market PayNearMe serves into perspective, he notes that in the categories it serves today, there are roughly $22 billion dollars per year flowing through in terms of payments.

“It’s big entities that we’re serving, so you can imagine that the volumes aren’t small,” Shader says of PayNearMe’s own cut of that larger payment flow. And, he adds, “we have essentially no churn in our business.” 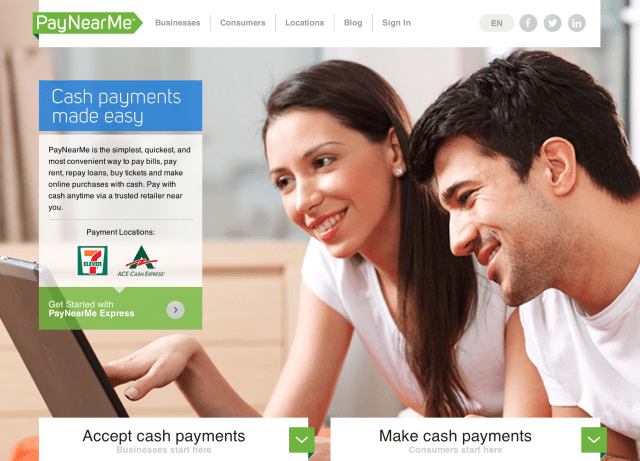 PayNearMe is building a complex, but valuable business, Shader also argues, but he admits that it can also be perceived as an “unsexy” one.

The additional funding will now be used toward helping PayNearMe move deeper in various sectors, including e-commerce, direct selling, banking, and healthcare.

With the Affordable Care Act, there’s a need to do error-free, fraud-free private transactions at massive scale, says Shader, while there’s an opportunity in the banking sector to automate cash receivables. The company actually already has a deal in the works with one of the largest banks in the U.S., but won’t be able to announce details until later this year.