Mozilla wants to help you find new apps and rediscover those you downloaded but forgot. So today it previewed Firefox Launcher for Android, a homescreen replacement powered by Israeli contextual computing startup EverythingMe that will become available for download “in the coming weeks”.

Firefox Launcher gives you suggestions of apps you’re most likely to use at any moment, smart folders that collect apps with similar purposes, and smart search that shows apps you have as well as those you might download or web apps you might visit that relate to a searched keyword

EverythingMe co-founder Ami Ben-David tells me that the deal includes revenue sharing, so if Firefox Launcher earns money by referring people to certain apps, driving ecommerce purchases, or showing sponsored content, EverythingMe will earn money. Ben-David says “It’s about distribution…They have almost half a billion people who love their brand and trust their brand.” However, EverythingMe will still promote its own branded homescreen.

Mozilla and EverythingMe showed off a demo of the forthcoming Firefox Launcher experience today at the InContext Conference in San Francisco, and gave me some extra screenshots not available on the Mozilla blog. 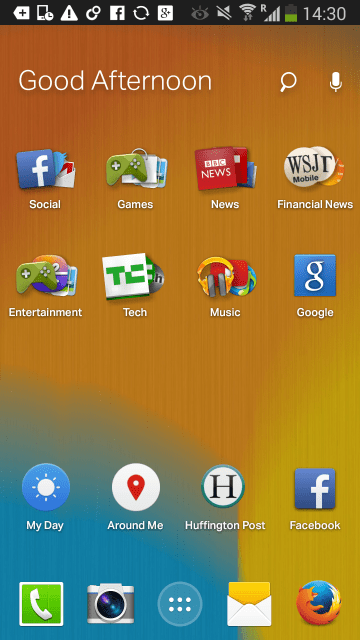 Here you can see how Firefox Launcher’s Prediction Bar (the second row from the bottom) knows it’s the afternoon and suggests appropriate apps like your calendar, Huffington Post News, and an app for checking out nearby businesses so you can plan your evening. These differ from the apps shown in the “Good Morning” screenshot above where the Prediction Bar suggest weather and alarm apps. It determines what to show based on tons of signals including your phone’s sensors, geolocation, what apps you’ve used in the past, and what other people like you use.

When you search for something in Firefox Launcher, it brings up related apps on your phone and relevant web experiences. It deeplinks these icons so if you search Katy Perry it will show you a Spotify shortcut that will open her artist page instead of the standard Spotify homescreen. 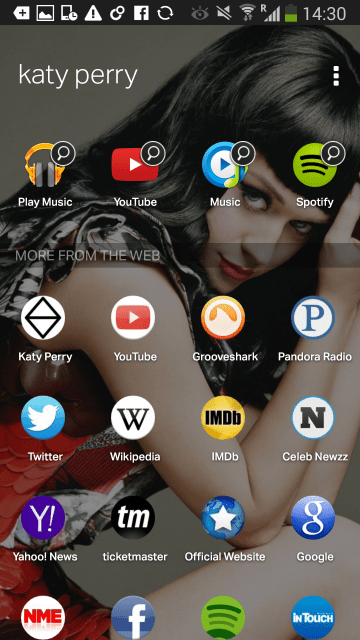 Firefox Launcher also provides context by directly providing information through content cards. Search “News” or “Tech” and it will bring up cards from various news sources about the top stories of the day. 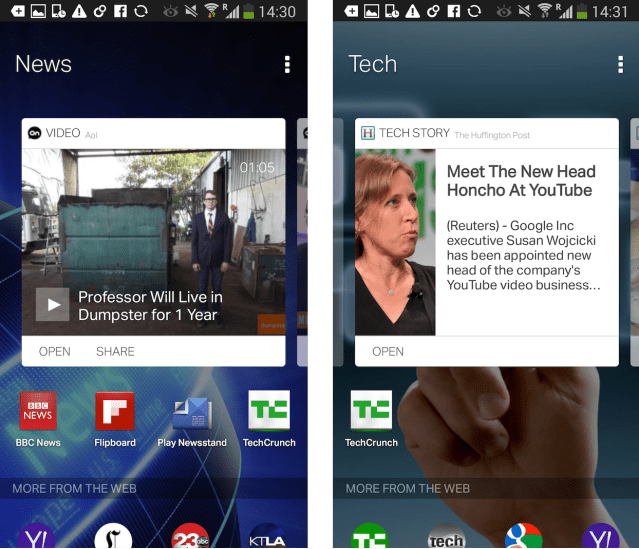 Firefox Launcher will compete with products like Facebook Home, recent Yahoo acquisition Aviate, Cover (though that’s a lockscreen and you can use both at the same time), GoLauncher, and more. With app stores over run with crap and us collecting more and more apps on our phones, smart ways to discover and surface apps are becoming all the rage.