AllCast, the Android application that provides users with something of an AirPlay-like experience for streaming music, videos, and photos to your TV via a variety of devices like Roku, Apple TV and Xbox, now works with Chromecast again, thanks to yesterday’s public release of the Chromecast SDK.

Shortly after Google’s Chromecast dongle first launched, AllCast creator and well-known Android dev Koushik Dutta reverse engineered the technology in order to create the AllCast app (previously called “AirCast”) so Android users could stream content from their phone or tablet to the big screen. But Google quickly shut off the app’s Chromecast support.

At the time, Google explained that the SDK was in “developer preview,” and that many changes were still ahead. That is, wanted the SDK to be for official testing only, not independent efforts like the AllCast application…however awesome they may be. To date, Chromecast only worked with a handful of top Android applications, including Netflix, Hulu Plus, YouTube, Pandora and a few others.

AllCast’s development continued, though, even without the Chromecast support, and the app exited from beta in December, allowing users to stream from Android devices to Apple TV, or any other AirPlay-enabled device. It also supports DLNA streaming, and today works with Roku, Xbox One, Xbox 360, Samsung and Panasonic Smart TVs, and Google TVs. Users can stream content from Dropbox or Google Drive, or from their local device, including SD cards. 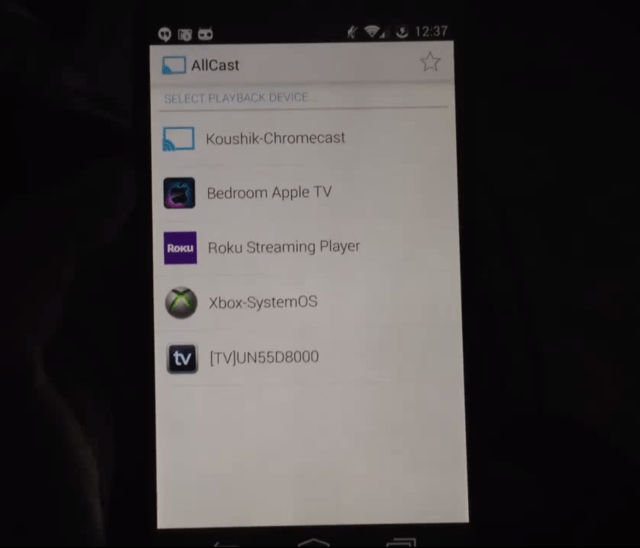 To do so, you just launch the app, pick your destination, and then the media you want to stream. AllCast automatically detects and lists your compatible file types.

Now, thanks the release of an official Chromecast SDK, AllCast works with Google’s dongle yet again. According to a post on Google+, Dutta says a Chromecast team member actually alerted him to the SDK’s release. He was going to wait until this weekend to do the integration work, but it turned out to be “very trivial,” he says, only taking 20 minutes or so to complete.

The updated AllCast app is now live on Google Play.

Dutta this afternoon posted he may be releasing a Chrome extension as well.