In January, Windows 8.1 scooted past Vista’s market share, taking the fourth-place slot behind 7, XP, and 8. In the month, Windows 8.1 picked up moderate market share, and Windows 8 eased as expected, meaning that Microsoft’s new platform is seeing slow total growth.

Looking more broadly, Windows 7 sat essentially flat, and Windows XP lost more than a half percent. Vista continued its descent into irrelevancy. The fine folks over at The Register were kind enough to graph the data: 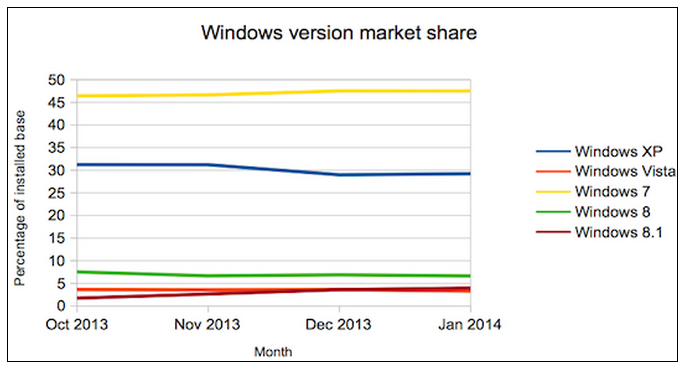 It’s worth noting that Windows XP’s decline as an operating system is slow, far slower than needed to have the world completely off the code by the end of its official support on April 8th. Windows XP will turn 13 this year. Microsoft wants it gone. Companies that have it deployed, however, seem to be more willing to stay put than upgrade.

The company’s planned Update 1 to Windows 8.1 leaked this weekend, showing off what Microsoft has in mind: fixes, improvements, and general quality of life updates to its current desktop and tablet platform. As you would expect from a non-numbered release, the changes are modest.

Update 1 was expected in April, but recent scuttlebutt indicates that the new code could land as early as March 11. Also, what leaked could easily not be a current build, or what the company intends to send to consumers.

Caveats aside, what can we see in Update 1? As expected, the new code includes user interface changes that make it easier to use the operating system with a keyboard and mouse. The Verge posted screenshots of the leaked build — full collection here — that demonstrate the new capability: 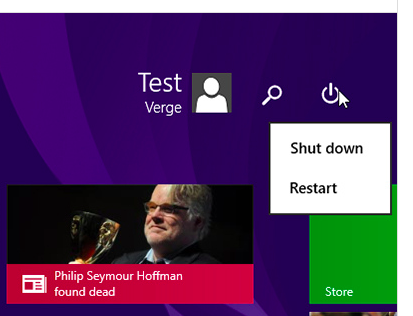 The other interesting, and also expected change, is the start of Microsoft bringing Metro apps to the desktop. Also included in Update 1 is the ability to pin Metro apps on the task bar. You can thus select Metro apps from the desktop environment, better blurring the dichotomization between the traditional and the new in Windows 8.x.

According to Paul Thurrott, the Windows Store app comes automatically pinned to the task bar by default. You can also choose to have all Metro apps that are open at the moment. Microsoft is de-emphasizing the Metro side of Windows 8.x, but by bringing the Store front and center on Desktop, it could mitigate a potential loss of momentum for its new platform and marketplace.

You can trace the arc of development for Windows 8.x in a simple line: Microsoft brought in so much new in Windows 8.0 that it crowded out the desktop experience. However, users still preferred the desktop part of Windows, leaving the nearly forced main experience in the way. 8.1 cut at the chasm between Metro and desktop, and it seems that Update 1 will continue that effort.