Rocketrip, a company out of the latest Y-Combinator batch, wants to save companies money by paying the employee to find ways to travel on the cheap.

The idea behind Rocketrip: for every two dollars you save your company, you get paid one. If hotel rooms in the area are, say, $150 a night, and you opt to crash on a buddy’s couch instead, you just saved the company $150 bucks. You get a gift card for $75, and the company still saves $75. Find a promo code that saves you $10 off your rental car? Bam — that’s $5 bucks for you.

At least, the slightly simplified version. It’s a bit more complicated than that in process, as there’s a point system involved. Every $2 you save the company earns you 10 points, and every 10 points you earn = $1 on a gift card (be it Amazon, Best Buy, Target, J Crew, AmEx, or one of their other 20+ vendors). But to simplify it: you save the company $2, you get $1.

Why wouldn’t a company just set a budget and forget it? It’s all about the mindset. When you give people a dollar cap, they tend to spend that money like it’s someone else’s. That becomes even more true as a company gets larger; when the budget they’ve allotted you seems like a drop in the bucket, and is handed down from some mysterious budgeting department that for all you know is on the moon, it’s a bit easier to spend with disconnected disregard.

Reward people for saving money by giving them money, however, and (theoretically, at least), people will be frugal. Your company only keeps 50% of the savings, but that’s better than saving nothing — especially when you multiply those savings by however many hundreds or thousands of employees a large company might have.

Sound familiar? Depending on where you’ve worked before, it might! I’ve heard of a few companies doing something similar — most notably, Google. In fact, Rocketrip president Daniel Ruch openly admits that this is loosely based on what Google reportedly does internally. When a Google employee travels for work, half of the money that they save under a pre-set cap is credited to an internal account, and they can spend that money on a later trip (for things like upgrades) or while on the trip itself. Rocketrip just opens that concept up to everyone. 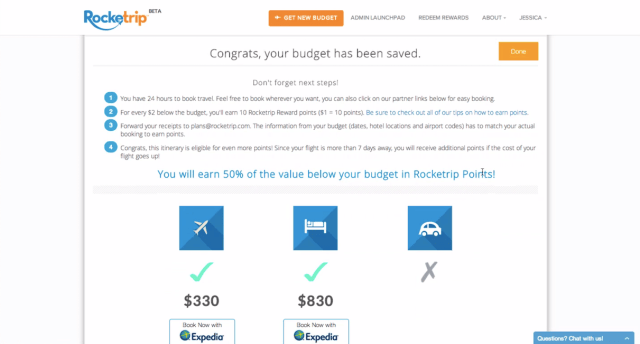 Rocketrip doesn’t plan on charging companies for the service, outside of invoicing them for whatever an employee is owed. So how do they make money?

While Ruch gave me the standard “We’re focusing on the product” answer that most startups give early on, they’ve actually already got something of a business model in place. In fact, they’re making money from two arms of the arrangement. On one end, they’re making money from the gift card vendors, who are willing to give them a small cut for the sake of customer acquisition. On the other, they’ve got travel vendors; if a customer opts to use a certain site (like say, Expedia) to book their travel, Rocketrip makes a bit of a commission.

Rocketrip is currently bringing companies on one-by-one. If you’re interested, you can find the sign-up details here.