Amazon is announcing a change to its Appstore today, which will now allow developers building HTML5 (web-based) applications to price those apps to sell, just the same as their natively coded counterparts. Previously, all HTML5 apps were automatically set to “free” when added to the Appstore, which may have lessened developer interest and uptake in this feature.

As you may recall, Amazon took the notable stance of opening its Appstore to HTML5 apps last August, offering developers a way to quickly turn their web applications and mobile sites into Android apps that could be downloaded anywhere the Amazon Appstore is able to run, including on Amazon’s Kindle Fire devices, as well as on other Android smartphones and tablets.

Developers wanting to use this option did not have to do any native app development – instead, they simply submit their URLs and Amazon does all the work of packaging up the app in the correct format, and adding the necessary metadata (like images, product descriptions, etc.)

The move was one which Amazon had likely hoped would help its Appstore grow, by capitalizing on the fact that, while many developers today still go iOS-first, they often still have at their ready a responsive website which runs well on Android. 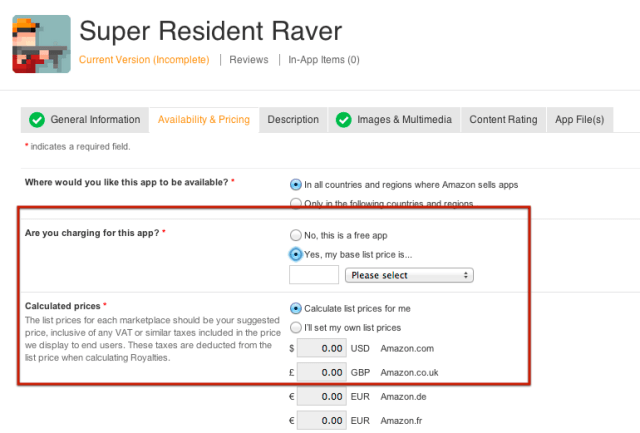 For consumers, it can be difficult to tell the difference between the native and HTML5 apps – they aren’t listed separately in the Appstore, making them hard to spot at a glance. Had a significant number of developers participated here by submitting their web creations, that could lead to the perception that the developer community is turning to Android in greater numbers.

However, Amazon didn’t share in its announcement how many HTML5 apps are available today – something that could indicate it doesn’t have numbers it wishes to tout just yet. (We’ve asked the company to clarify by offering us some figures, though, and will update when we have them. Update: Amazon declined to provide any numbers.)

In addition to being able to set pricing for their web apps, HTML5 developers are also now eligible to take part in Amazon’s Free App of the Day (FAD) promotion which can create exposure and send traffic and downloads to an application, similar to the way an iTunes App Store feature can.

Those apps chosen for a FAD promotion receive highly visible placement on mobile devices, Kindle Fire, and the Amazon Gold Box Best Deals page, and are mentioned in Facebook and Twitter announcements.