Microsoft loves to rename its consumer-facing products in an effort to better position its offerings in the competitive marketplace. Just look at Outlook.com, formerly Windows Live Mail, formerly Hotmail, for example. But today, Microsoft’s rebranding of its cloud storage service “SkyDrive” to “OneDrive” wasn’t just an attempt at catching consumers’ attention by renaming an older service. Instead, it’s an example of Microsoft conceding the “SkyDrive” trademark to another party.

As Microsoft helpfully points to in its blog post, the real reason behind the rebrand is a dispute with European broadcaster BSkyB, which claimed the name “SkyDrive” infringed on its own trademark. The company, one of the largest pay-TV providers in Europe, offers online streaming, mobile apps, and even had its own online storage service called “Sky Store & Share” from 2008-2011.

BSkyB took Microsoft to court to force it to change the name of its cloud storage service, first launched back in 2007. (Previously called Windows Live SkyDrive and Windows Live Folders – see what I mean about Microsoft rebranding things?)

TechCrunch broke the news of BSkyB’s win in court – a case which first started back in June 2011, and specifically concerned “an action for passing off and for infringement of two registered Community trade marks (CTMs) and two UK registered trade marks (UKTMs) for the mark ‘SKY’ by which the Claimants [BSkyB] seek to prevent the Defendants [Microsoft] from using ‘SkyDrive’ as the name for their cloud storage service throughout the European Union.”

Microsoft, meanwhile, had claimed it wasn’t easy to confuse its cloud-based SkyDrive services with BSkyB’s pay-TV, mobile and online services.

Shortly after BSkyB won a judgement in the England and Wales High Court in June 2013, the two parties announced they had come to a settlement that July. Microsoft decided not to appeal as it had previously threatened, but rather agreed to transition its service to a new brand. 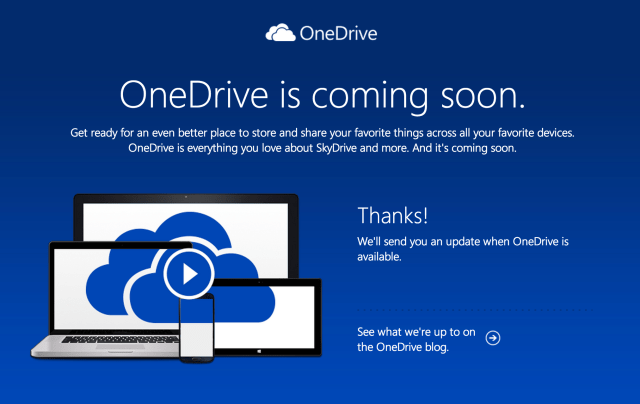 While Microsoft could have just changed the name to “OneDrive” in the affected European markets where BSkyB could make its claims, the company rightly decided to shift the entire brand over to something new.

Microsoft notes in the blog post that the SkyDrive service itself is not changing, and all users’ content will still remain on OneDrive and OneDrive for Business as the new name rolls out across Microsoft’s portfolio. However, the OneDrive preview page hints there may be new things in store, saying “OneDrive is everything you love about SkyDrive and more.” The page is currently accepting email sign-ups from those who want to be notified when OneDrive is live.