Android continues to be the most popular mobile platform, with its share of smartphone sales climbing in every major market in Q4 2013, now accounting for 69.5% of all sales across 12 key markets versus 23.7% for number-two Apple, according to figures out today from Kantar Worldpanel, a market research subsidiary of WPP. But the story is shifting when it comes to looking at what the engine is behind that growth.

Samsung, the handset maker that has led the charge for Google’s OS, is “now coming under real pressure in most regions” as it faces stronger competition from local players in markets like China. There, Xiaomi led in sales for the last 12 weeks of 2013, and other Chinese handset makers like Huawei also continued to gain ground. It’s still Android, but delivered in different, more locally focused packaging.

Elsewhere, although Apple has seen overall declines — losing a proportion of sales in each of the 12 big markets tracked by Kantar, in fact (the trend for some time now) — its new iPhone 5 models continue to lure in users at the high end, and in certain key markets, if not all of them. In the U.S., Apple lost nearly 6% of sales compared to a year ago but still accounted for just under 44% of smartphone purchases in the holiday period (Android came in at nearly 51%).

The continuing appeal of Apple among high-end users also remains a driver of sales for the company in Japan, where Apple is the biggest player of all with nearly 69% of all smartphone sales. Kantar says that a large reason for that “unarguable success” has to do with NTT Docomo, the largest mobile carrier, now finally selling the iPhone. In Q4 it accounted for some 58.1% of all smartphone sales at Docomo, a nice boost to the 92% of sales at Softbank (yes, 92% of sales) and 64% at KDDI.

Kantar says the effect of competition on Samsung resulting in the Korean OEM taking 40.3% of sales across the big five markets in Europe (UK, Germany, France, Italy and Spain) — that’s down 2.2 percentage points. In the key market of China, Samsung accounted for only 23.7% of sales — flat compared to a year ago.

The decline in sales for Samsung, particularly for high margin devices, has been matched also by a decline in profit growth.

“It’s no surprise that everyone is concentrating on high growth China, but currently local brands are proving clear winners,” Sunnebo writes.

He says that in December, Xiaomi overtook both Apple and Samsung and is now the top selling smartphone in China, “a truly remarkable achievement for a brand which was only started in 2010 and sells its device almost exclusively online. The combination of high spec devices, low prices and an ability to create unprecedented buzz through online and social platforms has proved an irresistible proposition for the Chinese.”

Important to note that Samsung appears to still be the biggest mobile phone maker in China over the whole of last year, and globally it accounted for 32.2% of sales across all 12 markets in the last 12 weeks of 2013.

Meanwhile, Microsoft’s Windows Phone platform continues to take a minor third position, with 4.4% of all smartphone sales globally, according to Sunnebo. Bu in contrast to Apple, it is in a continued phase of growth — with Latin America the only region where its sales declined compared to a year ago. Still, Windows Phone’s portion of sales remains small. Its biggest market in terms of market share was in Europe, but its performance was flat on a year ago, with Windows Phone accounting for 10% of all smartphone sales.

“Windows Phone has now held double-digit share across Europe for three consecutive months,” Sunnebo says. “Unfortunately for Nokia the European smartphone market is only growing at 3% year on year so success in this market has not been enough to turn around its fortunes – reflected in its recent disappointing results.”

Last week, Nokia announced that it sold about 8.2 million Lumia devices — its handsets built on the Windows Phone OS. That was a decline on the previous quarter, especially bad given that it was the holiday sales period.

Windows Phone, moreover, is still only doing a bit better than Kantar’s generic “Other” grouping. This category would include lingering Symbian purchases, and it accounted for 2.4% of all smartphone sales, Sunnebo tells me.

BlackBerry continues to show up on Kantar’s league tables but with a miniscule proportion of sales. It declined in all 12 markets tracked by Kantar and didn’t manage to break through 4% in any market.

The UK was the best-performing market for BlackBerry, with the device maker taking 3.2% of sales. But then again, the UK it seems has a wider love affair with smartphones. Penetration in the country now — that is, the number of mobile phone-owning consumers that are using smartphones — is now nearly at 70%, with 85% of all handsets sold in Q4 smartphones. Although Samsung may be hitting tougher times, it’s still going strong in the UK, where it accounted for 31% of all smartphone gifts in December, with Apple trailing at 28% and Nokia at 18%. 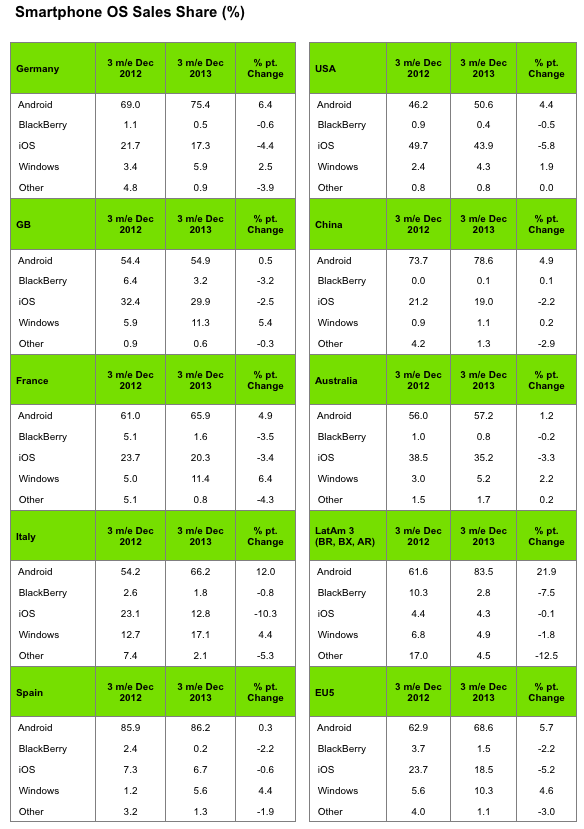