When it comes to lending and borrowing money, banks have long been at the center of the equation. However, with the proliferation of new information technologies, mobile devices and the good old Web, new methods of borrowing and lending have emerged that are slowly toppling the bank-centric model. The best and most promising example is peer-to-peer lending, which leverages technology to directly match those who need money with those who have money to invest, while cutting out the middle man.

By enabling the efficient flow of capital across international boundaries and wealth divisions, and by allowing lenders to connect with and send money directly to borrowers, peer-to-peer micro-lending has the ability to have an enormous impact — on a global scale. However, while a handful of organizations and institutions have attempted it, direct P2P lending across international wealth divides has never been done before at scale, says Julia Kurnia.

So Kurnia decided to change that. In 2009, she founded Zidisha, a non-profit organization dedicated to bringing direct, P2P lending to low-income entrepreneurs in developing countries. Without much of a roadmap to follow, Zidisha has spent the intervening years plotting its course, slowing developing a micro-finance model that could work at scale — through good old-fashioned trial and error.

Fast forward four years, and the micro-finance platform is finally ready to make its public debut. Having put the finishing touches on its peer-to-peer lending model at Y Combinator — where it will become the accelerator’s second non-profit graduate in March (or third, if you ask the Immunity Project) — Zidisha is launching today with an exciting value proposition. The startup considers itself to be the first true direct, peer-to-peer lending platform, enabling anyone and everyone to send micro-loans to budding entrepreneurs in the developing world.

Exciting as that idea may be, to many, Zidisha’s model may appear at first glance to just be another Kiva clone. Yet, what’s unique about Zidisha is that, unlike other micro-finance programs or companies, the platform offers anyone the ability to interact with and lend money directly to low-income entrepreneurs.

While platforms like Prosper and Lending Club helped pioneer P2P lending early on and bring it to the mainstream and organizations like Kiva have been successfully employing the model in developing markets through services like Zip, Zidisha wants to take it one step further.

The key to doing that, Kurnia tells us, and to differentiating its approach from others, begins with how it approaches this notion of “direct.” Though P2P-style micro-lending has successfully reduced the importance of banks in the borrowing process, most micro-finance organizations still rely on intermediaries to make the process work. Kiva’s strength, for example, comes from the numerous close relationships it has been able to forge with local partners, which in turn help give it scale and provide better coverage.

However, because of these relationships, Kiva relies on its field partners to distribute its loans to entrepreneurs. Zidisha, on the other hand, wants to remove reliance from the micro-lending equation completely.

The reason is that, although many micro-finance platforms generally have their heart in the right place, ultimately, the cost of relying on third parties falls on the entrepreneur. The average global interest and fee rate charged by these intermediaries (or field partners) is 37 percent and, in some markets, can be as high as 70 percent. Even those micro-finance organizations on the ground who receive 0 percent-interest loans from Kiva can charge an average interest and fee rate of 35 percent.

Furthermore, it isn’t cheap for micro-finance organizations to develop and maintain a physical presence on the ground in these developing markets. The high operation costs that come as a result mean high fees and, ultimately, a bum deal for local entrepreneurs by preventing them from earning enough (in relation to the cost of their loans) to have a real impact on their quality of life, and their family’s standard of living.

And that’s where Kiva Zip and Zidisha differ: While Kiva Zip allows borrowers and lenders to communicate with each other directly (via mobile), to a lesser degree, it still relies on local partners to help vet borrowing applicants and manage repayments. In contrast, Kurnia says that Zidisha does not allow any third-parties, particularly local organizations, to post content for borrowers or manage loans.

So, to avoid high operational costs and offer better terms for borrowers, Zidisha’s staff of fifty is comprised almost totally of volunteers, who take charge of the startup’s operations, whether it’s reviewing borrower applications, disbursing loans, registering repayments or answering queries. In this respect, the Zidisha founder tells us, the company is similar to Wikipedia. In other words, it’s a socially-conscious online community run almost exclusively by volunteers.

The other appeal of Zidisha’s model lies in its terms: The average interest and fee rate for Zidisha loans falls between 5 and 9 percent, most of which, Kurnia says, goes toward covering the cost of transferring the loan. To help cover the rest of its operational costs, the platform offers lenders the ability to make donations directly to Zidisha, and makes it easy to leave tips when making a loan, for example. 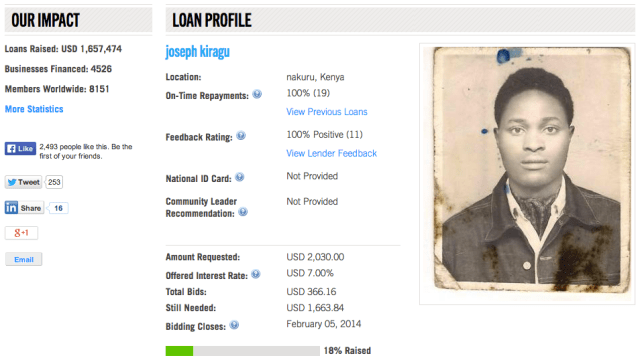 Taking a page from Watsi’s book — itself a fellow Y Combinator-backed non-profit — Zidisha help facilitate a more direct relationship between borrowers and lenders by allowing lenders to post questions and comments while interacting with entrepreneurs, who, in turn can share progress reports and updates on the growth of the business. This allows entrepreneurs to connect directly with the investor and to develop an actual relationship, which in turn provides lenders with the opportunity to see the impact their micro-investing provides.

Zidisha provides additional incentive by ensuring that 100 percent of its lender’s investment is disbursed directly to the borrower’s business. The platform also allows lenders to set their own interest rates, which are paid back in weekly installments, and borrowers themselves are the ones who post their loan applications.

When Zidisha does work with third parties, it’s to provide the kind of technological support and web and mobile networks that enable the company to provide its services to local entrepreneurs. In fact, it’s these services that can help further reduce the barriers between borrowers and lenders by providing the ability to do local credit checks and verification, offer low-cost electronic money transfers and independent tracking of borrower performance.

But that’s the extent of it, the founder says. After that, Zidisha aims to get out of the user’s way to let them begin interacting directly with borrowers.

Today, the startup is working with 3,100 lenders from eight countries — including Benin, Burkina Faso, Guinea, Indonesia, Kenya, Mali, Niger and Senegal — and, with its launch behind it, plans to begin expanding that roster in the coming months. Thus far, $1.6 million in loans have been given directly through it’s platform to 3,700 borrowers. Meanwhile, the average interest rate is 4.6 percent over a four-year time span and the average default rate is a lowly 8 percent.

Finally, when we talk about the true potential for direct, peer-to-peer lending to have a big impact at a global scale, the founder says, it’s important to remember that the frequently restrictive political and economic conditions these entrepreneurs are working mean that it’s expensive for local banks to lend to small business owners. 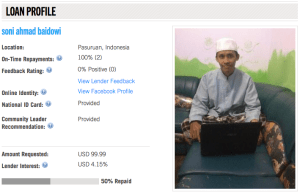 It’s no surprise then that many of the borrowers work with micro-finance institutions. However, Kurnia explains that individual business expansion loans often carry prohibitive collateral and interest requirements due to the institutions’ high administrative costs. Zidisha wants to remove these barriers and provide borrowers with access to loans that allow them to retain a greater share of their income and better support their families as a result.

So, while organizations like Kiva continue to dominate most of the mindshare in this market, startups like Zidisha are working to create a forum in which a journalist in San Francisco can connect with and befriend entrepreneurs from some of the world’s most remote and impoverished places. In the end, if the platform succeeds it will be because it has created a lending experience that doesn’t just revolve around the collection of loans, but the “[collection] of biographies,” to quote one of the site’s lenders.

Whether it’s a saleswoman from the war-torn Casamance region in West Africa, who “gets up at four in the morning to read Dale Carnegie books,” the founder says, or an entrepreneur who is starting a computer training school in a Nairobi slum, the stories are sure to put your own in perspective and leave you with a feeling that, finally, technology is being used to actually help people — not just make sharing your photos that much easier.

Sites like Watsi and Zidisha are putting the days of “adopting a child” or family in a developing country, where all you received was a picture or a small brochure, with no sense of where your investment was going or what it was actually being used for. In other words, they’re making giving (or lending) a lot easier to do and far more rewarding.