Google may soon offer a new service that combines its advertising business with its knowledge about local transport options, taxis and – in the long run – autonomous cars. The U.S. Patent and Trademark Office last week granted Google a patent for arranging free (or highly discounted) transportation to an advertiser’s business location.

Here’s how it works. Say a Vegas casino really wants your business. Not only could it offer you some free coins, but if it deems the cost worthwhile (using Google’s automated algorithms, of course), it could just offer you a free taxi ride or send an autonomous car to pick you up. 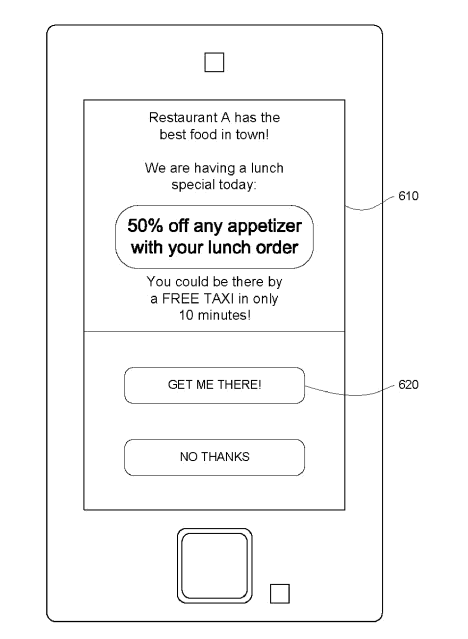 Google’s now-patented algorithms would take into account things like a user’s current location, the route and potential forms of transportation (train, personal car, taxi, rental car, or shared vehicle) to an advertiser’s business, as well as the user’s daily agenda and ” the price competing advertisers are willing to pay for the customer to be delivered to alternate locations.”

As Google notes, the most difficult part about getting a sale for a brick-and-mortar business can often be getting people to your location. Google says its invention would make getting a potential customer into a business easier for stores that otherwise would have to invest in more expensive locations close to high-traffic areas.

In at least one of Google’s examples, this involved using an autonomous car, though low-tech options like giving people coupons for public transport are also part of the patent. Google would use a customer’s preferences, as well as the price an advertiser would be willing to pay, to determine the best offer to a user. 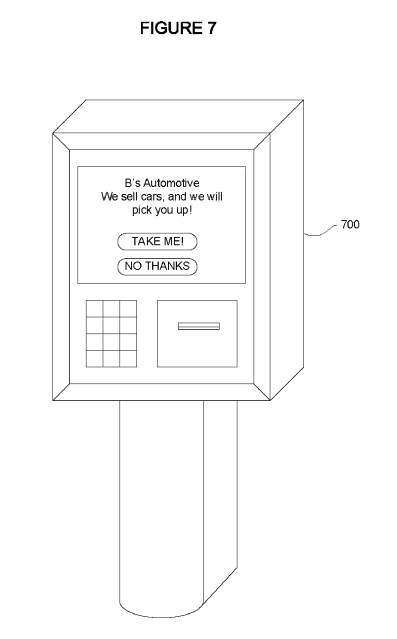 Advertisers, of course, could use a number of factors to determine who they want to target. A theme park, the patent notes, could choose to just advertise to “users indicating that they are accompanied by one or more children in order to increase revenue.”

Just like Google’s other advertising options, the patent envisions a bidding system where different advertisers get to compete for customers. Those bids, Google says, could be based on a customer’s buying history and other factors. “For example,” the patent’s authors write, “advertisers may bid more to have customers which consistently use the transportation service to make purchases as compared to those who appear to travel without actually having made any purchases.”

Users may also have to identify themselves when their car arrives, and advertisers may also bid on having a car pick up customers to take them back to their homes or original pick-up locations.

The patent was filed in 2011 and the inventors (Luis Ricardo Prada Gomez, Andrew Timothy Szybalski, Sebastian Thrun, Philip Nemec and Christopher Paul Urmson) are also responsible for many of Google’s driverless car patents.